15 suspected robbers have been arrested by the police department in Ashaiman. The gang was given a hot Chase after they snatched the car of a woman.

Police traced the gang to Atedeka where they were arrested together with other suspects.

The police in Ashaiman have reportedly arrested 15 persons for robbery and car snatching.

The suspects are being held in the of the Ashaiman Divisional police headquarters assisting in investigations.

In a Daily report sighted by Ghanaweb, the suspects snatched an unregistered Range Rover being driven by a woman at Adjei -Kojo and bolted.

"The gang was, however, chased by a group of commercial motorbike riders (okada) who were later joined in their pursuit by the police team" the report stated.

The team of police traced the criminals to their hideout in an area around Atedeka, where they were finally arrested by the police.

A search conducted by the police in the area led to the arrest of additional suspects and the retrieval of a weapon. 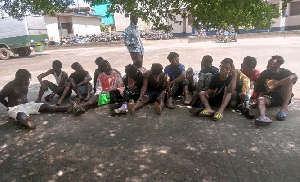