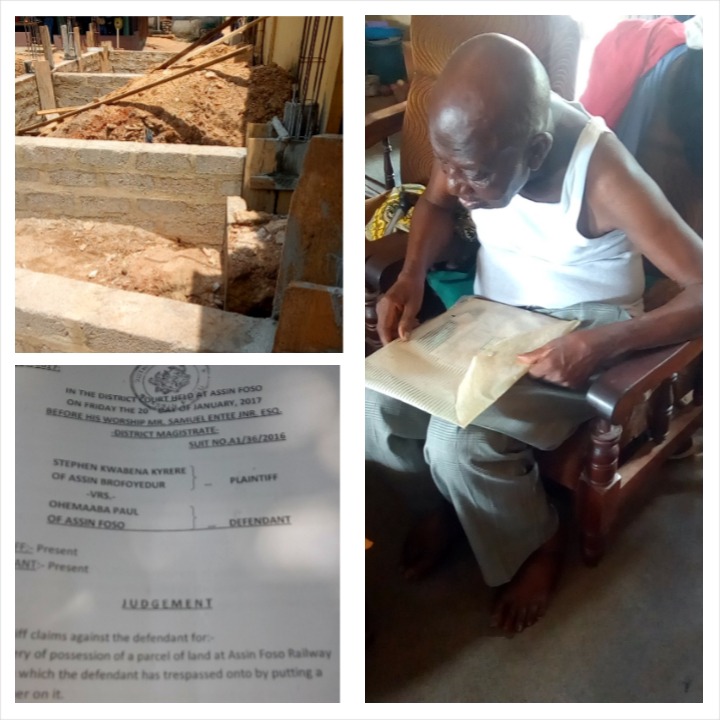 A Sub divisional chief , the 'Abakomahene' of Assin Foso, Nana Kutin Amoah and the Chief of Assin Juaso had connived and extorted a whooping amount of GH¢ 12500 from 85 year old visually impaired man of Assin Brofoyedur on land ownership.

According to the old man Opanin S.K. Kyire, he bought a piece of land in the year 1988 from the a former DCE Honourable Yamoah who hails from Aseibu and built on it two years later at Assin Foso.

In 2016, he demolished the structure close to a marshy area and put up a new one and left a small portion which wasn't up to half plot but that time, a Queen mother of Assin Dompem came to him to plead to enable her put up a kiosk for livelihood and vowed to remove the kiosk whenever Mr Kyire may need his land.

In that year, the queen mother died and Mr Kyire decided to claim back his land and ordered for the removal of the kiosk as he wanted to build on it.

The son of the Assin Dompem called Ohemaaba Paul drag Mr Kyere, the visually impaired man to court including his sons for the removal of his mother's kiosk on the land owned by his late mother.

According to Mr Kyere, "he only helped the Queen mother to site her kiosk on his small piece of land and didn't sell the land to her but things wasn't clear for Paul, the Queen mother's son and drag the issue to the District Court at Assin Foso in 2016.

On 20th January, 2017, the Assin Foso District Court, presided by His Worship, Mr Samuel Entee Jnr. ESQ came out the ruling in favour of Mr Kwabena Kyere, the plaintiff, who is a visually impaired man as the rightful owner of that piece of land following his ability to show to the court the legal documents, the site plan, allocations of the land to the court. The Queen mother's son, Paul again drag the issue to Assin Foso Chief, Kutin Amoah, the Abakomahene who forwarded the case to the Chief of Assin Juaso who is the rightful custodians of the Foso lands.

The chiefs didn't listen to the ruling given on 20th January 2017 by the District Court and rather slapped Mr Kwabena Kyere, the visually impaired man with a fee of GH¢ 12500 before they could continue with the building.

Mr Kwabena Kyere, a pensioner and Visually impaired was forced to pay GH¢ 3000 within one month and he had done so to the chiefs despite having the genuine land documents as the owner.

Issues wasn't clear as the chiefs are still demanding the rest of the money till it's up to 12500 Cedis which didn't auger well for the 85 year old visually impaired man.

Though, he had been cleared by the Chief to continue building the structure but they are on his neck too collecting the rest of the 12500 which on legal terms doesn't seem right.