By the_Kelvin_guy (self meida writer) | 7 days

At a point in life, it is evident that we become solely responsible for how people see and value us. Our actions creates a certain impression in the minds of people and they tend to judge us by what they get to see us do. For this reason, I would like to advise us all to be mindful of what we do because there are people watching and trust me, not all people want to spread good news about you. Some people are just waiting to hijack the good news about you and spread the bad news with joy.

This article is a funny yet deep one and I think bringing it to your notice is very vital. It goes beyond the superficial and is likely going to be an obstacle in the path of the lady who decided to post the picture. Maybe, I'm taking it too far, maybe not.

A certain young lady has got people pointing fingers at her after she posted an unexpected yet weird picture. In the picture, you get to see her give four different poses as she held a certain substance in a bottle which is probably and 1 L bottle. 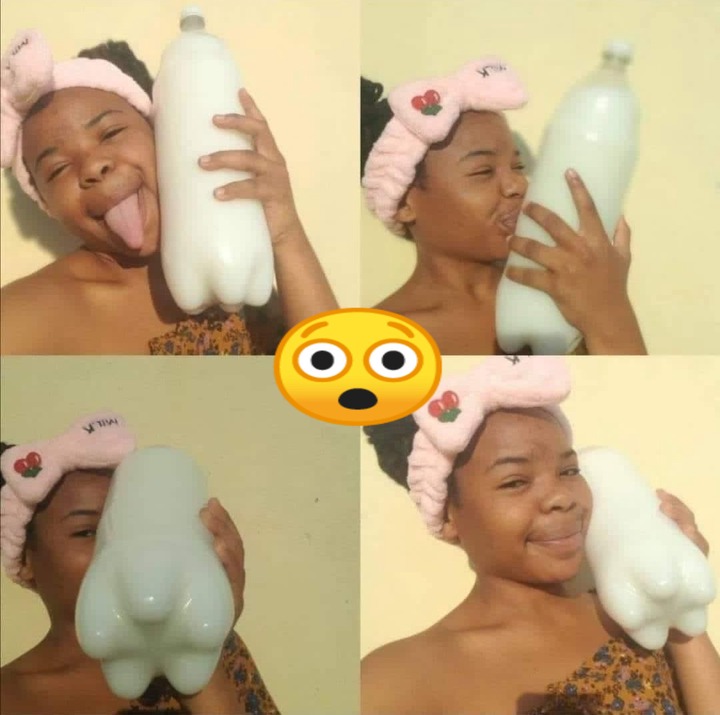 Within the bottle was a substance which looked like milk but then, nobody knew the components of that substance but her and maybe, her boyfriend. The picture had nothing wrong with it. It was perfect until you read the caption which came with it. After reading the caption, you get to see that there was more to the poses and the smiles in her picture. Let us go straight to take a look at the caption she decided to add to her controversial picture. 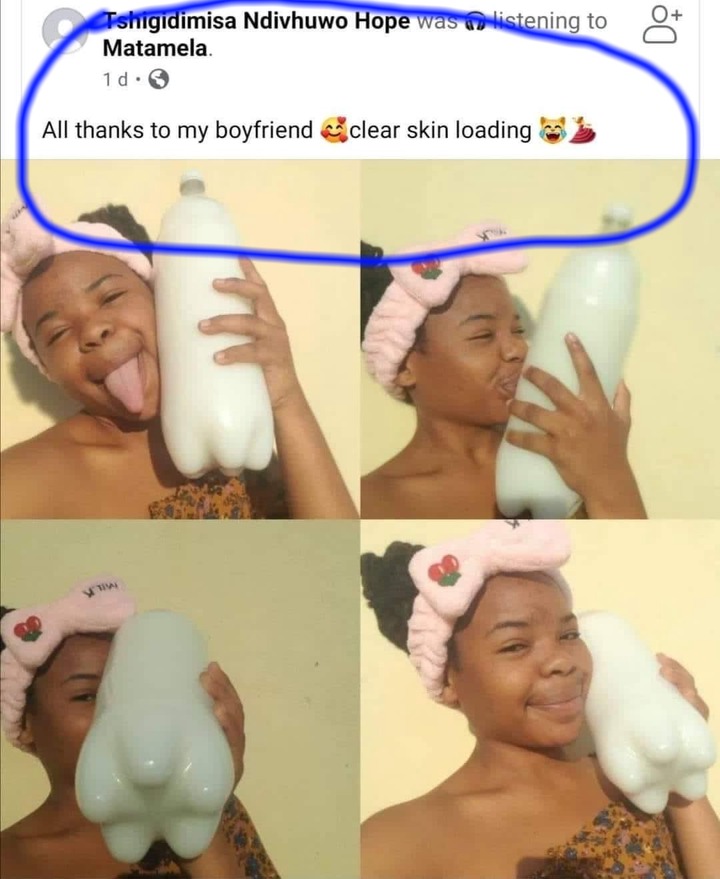 Her caption read, "all thanks to my boyfriend, clear skin loading". After the caption landed on the internet, it started to influence the thoughts of people with regards to such a post. A single post sparked controversy. Her caption literally means that she obtained the milk from her boyfriend after he managed to pass them out through his private parts. I am sure most of you know what I mean.

There is a certain saying on the outside which goes like, if a lady manages to consume "milk" which is extracted out of a male, it makes her skin look very nice. I don't know how true this statement is but I am sure this lady had probably heard such a statement and decided to see if it was truly true. Maybe curiosity propagated her advent into finding out how true it was but there is a question mark to her curiosity. Even if you want to see if such a statement is true, is it necessary to go in for a full bottle?

How many days and months did it take her to extract this juice from her boyfriend? Did she even think about the likelihood of her boyfriend passing out during such an act? These are some questions which keeps on ringing in my mind whenever I get to see the picture. She felt posting the picture would give her an attention from the public but it rather saw the public criticizing her for her acts.

5 Habits That Could Damage A Man's Private Organ

END TIME IS NEAR: This is What a Beautiful Lady Was Caught Doing in Public That Got People Angry

After reading this, you will not have sex with anyone.

Man “Sprays” Girlfriend’s Honeypot With Shisha To “Spice” It Up

The Style Will Be Great: Check Out Ghanaians Reaction After Acrobatic Picture Of Lady went Viral

Man, 28, Collapsed After Following Instructions From A Friend