By mightysagacious (self media writer) | 2 months ago 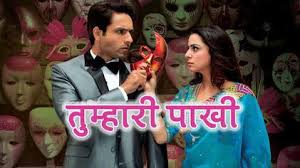 The Episode starts with Pakhi coming in the kitchen and asking Maa ji to work prompt. She sees the water running from the tap and fixes it. Maa ji says we don’t have water problem. Pakhi says if the water runs like this, it will be a problem in the morning. Maa ji asks for the plumber’s number. Pakhi checks her phone and finds the call history missing. Pakhi calls the custormer care and asks for call history. Maa ji is tensed. Pakhi receives the call history and is shocked to see Anshuman’s number many times.

She says how is this possible. She thinks it means Anshuman was right, I called him. Maa ji says give me plumber’s number. Pakhi gives him. Pakhi thinks who did this and thinks about Anshuman’s words. She says someone has swapped the numbers and made them right again,

who can do this and why. She thinks about Maa ji’s lie. She says it means Maa ji did this, she can’t do this. She thinks Ayaan did it. She says Ayaan is doing this, but why. She says he is actually playing a big prank but why.Girish talks to Lavanya and says I was thinking we should throw a big party next month. Lavanya is lost. He asks what is the matter, you are thinking what your friends are thinking. She says no, how could they say like this, I have my family with me, you, Anshuman, Pakhi………….. Girish looks at her. Lavanya says I will go and see Naina, she is sleeping alone. Bua comes to Girish and smiles. She says time makes everything right, Lavanya has accepted Naina and it looks she will accept Pakhi too. Girish says yes, but its important for Anshuman to accept Pakhi, I think he will accept her after Ayaan accepts her.

Its morning, Pakhi is getting ready. She applies the bindi and comes to Anshuman with the sindoor. He happily take the sindoor box but it falls. Pakhi holds the sindoor in her hands. He says I m sorry. She says its fine. He fills her maang and music plays……………………. He says is everything fine. She says what. He says you are worried about Ayaan, I told you he is mischievous, but don’t doubt on him. Pakhi says yes, he is changing now. He says right and looks at the calender. He marks on it, its four days over. He says today is your fourth day. She says 11 days more, its enough, I have faith that everything will be fine.

He says right and leaves. She cleans her hand and calls the history teacher. She says I want to talk to you about Ayaan. The teacher says even I want to talk to you. The teacher asks her to come and meet her at Mother Mary Church. Pakhi agrees. Ayaan is planning the climax of his mission. Maa ji smiles. Even Ayaan is going to the same church. Pakhi asks Anshuman to drop her at the church. He asks why. She says I m going to meet his teacher. Anshuman says you are doubting on him, you should talk to Ayana first.

Pakhi says if I m right, he has broken my trust and I can’t trust him again. Anshuman and Pakhi leave. Ayaan says today Pakhi won’t be able to win. Pakhi asks Anshuman to drive faster. Ayaan acts as if he is a poor child needing money and playing songs outside the church to earn some money. Ayaan plays the violin sitting outside the church. Many people see him and he sings Saari umar hum mar mar ke jeeliye……………………. Everyone gather around him. Anshuman drops Pakhi at the church. She says thanks, I will take taxi on return.

She sees the time. She sees the crowd and goes to see. Anshuman sees Maa ji there and is shocked. Anshuman says it means Ayaan is here, its means Pakhi is right about Ayaan, it means the history teacher is part of Ayaan’s plan, I have to go. The history teacher and Pakhi can’t meet as Anshuman stops Pakhi. The teacher sees Ayaan on the stairs and is shocked. Anshuman asks Pakhi to come with her and takes her. Ayaan acts poor and says I don’t want money but love. Pakhi asks Anshuman what happened, the teacher will go, I need to talk to her.

Anshuman makes excuses saying my stomach is upset and she laughs. The teacher asks Ayaan what happened. He says take me to your home, I won’t go to my home as my step mum beats me, please adopt me. She says ok I will. Anshuman gets freshen up. Pakhi says I will talk to the teacher once and calls her. The teacher talks to her. The teacher scolds Pakhi and says I don’t want to meet you or see your face. Pakhi is shocked.