It Is Ridiculous: Why Cover Face Of Robber And Ask Public To Provide Intelligence? On several occasions the Ghana Police Service had appealed to the public to share information about some suspects to a crime so they could cause their arrest and effect prosecution. In some cases, they attach images of suspects they had arrest and entreat the public to help them solve the ‘puzzle’ when other accomplices are on the loose.

Today, this has been repeated and its best the Police are corrected to do the needful if they so wish to have the public produce any useful information about the case. From Tepa in the Ahafo Ano District, the Police had arrested one ‘notorious arm robber’ named Emmanuel Kofi Oko Afari.

According to a report shared by the Police Service, the suspect is involved in a series of robberies in the area and had been on a wanted list till now. To ‘scare’ his accomplices about the impending consequences of their crimes, the police warned that “his accomplices are advised to turn themselves in or be arrested soon.”

But here comes the disappointing part of the message the police published on their official Facebook page. An image of the suspect, Emmanuel Kofi Oko Afari, was attached to the message but with his face covered, and with a plea to the general public to assist the Police with information that will lead to the arrest of the accomplices.

“The general public is also called upon to volunteer and assist the police with any information that will lead to the arrest and subsequent prosecution of his accomplices.” the police noted in their post.

This is practically useless, unless the earlier ‘threat to the accomplices to turn themselves in before arrest’ is grounded on some intelligence about their hideout and operations had been uncovered by the Police.

How could the public assist the police with just the name of the robber? It is typical in Ghana, where people bear the same name. If indeed the Police are cock-sure about the suspect being a ‘notorious robber’ in the vicinity, covering his face in the post isn’t helpful. Identifying any other suspect could be easier with a full image of the arrested one. 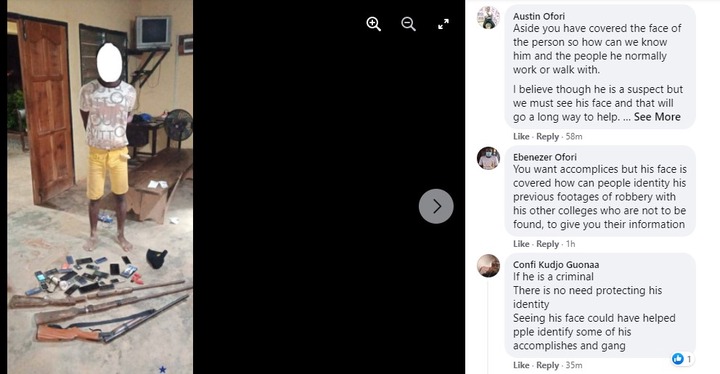 It is no wonder that some Ghanaians had started lambasting them for this ‘incomplete’ lead. Ghanaians could have helped, as always when the police divulge sufficient information about a case but this is simply terrible.

They better be advised and correct their mistake to restore confidence in the service. Over the past months, cases of robbery and murder had been on the ascendency, a situation that had caused most Ghanaians to be apprehensive.

Mark It On The Wall; If The NDC Comes Into Power, They Will Collapse The Bank- Captain Smart.