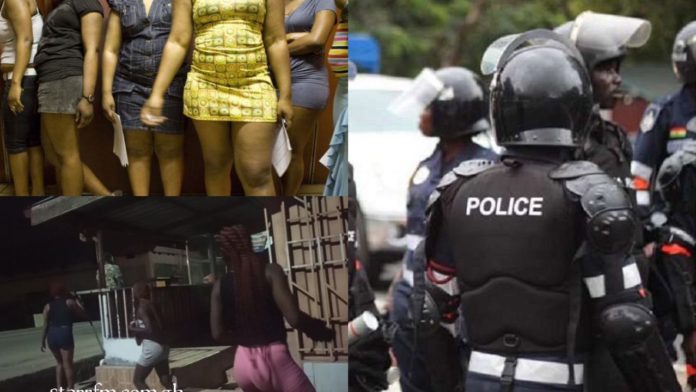 The joint security force made up of the police, military, immigration, fire service, and the National Investigation Bureau searched the Little Ben brothel, Bula Spot Pub and brothel, Rumors, and Kofcity Pub, which are infamous for executing commercial sex acts (NIB).

The procedure of gathering information has the aim of informing the security staff of the unlawful activities occurring in the facilities.

According to Isaac Appaw-Gyasi, the MCE for New Juaben South, the facility owners have been told to come before the Municipal Security Council (MUSEC) today, Friday, June 30, 2022, with the operation permission and any other required papers.

While producing a significant amount of dried leaves believed to be Indian hemp for their customers, a few suspects were detained in a "rumor facility." They were immediately hauled into jail and detained at the Central Police Station until a court date could be scheduled.

The security measures were implemented in response to a Starr News investigation that found young female Nigerians, including juveniles, were being transported to Koforidua, the capital of Ghana's Eastern Region, for sexual exploitation and then being forced into prostitution. This was accomplished through a plot hatched by certain Ghanaians and Nigerians.

The Bula Spot and the Little Ben area are two well-known brothels that human traffickers utilize as shelter for their victims in Koforidua. A delegation from the Nigerian High Commission in Ghana visited Koforidua in the meantime to speak with the local Nigeria Association and the Eastern Regional Police Command about the matter.

A sex trafficker who had been impregnated, HIV-positive, and ejected from the brothel was saved by Ibrahim Amevor, a good Samaritan who the team met. The steps to facilitate her repatriation have been launched by the Nigerian High Commission.

You can not arrest the Dollar - Mahama reacts.

Instead Of You Arrest To Mahama, You Are Chasing Labianca- Top NPP Man Attacks Special Prosecutor

Here Are 5 Things You Shouldn’t Trade For Love.