By NokobiTV (self media writer) | 6 months ago

On Thursday, outraged people thronged the police station, demanding the release of the suspect in jail, who was scheduled to be executed. 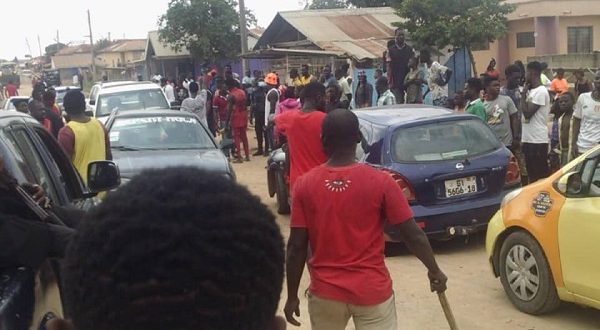 Residents in the Bonsu Nkwanta and its environs in the Juaboso district, according to Adom News' Augustine Boah, have been complaining about an increase in robberies.

As a result, when the three guys were discovered stealing, they intended to punish them so that other crooks in the region would be deterred.

According to Augustine Boah, while one of the suspects managed to flee, his two accomplices were still in the hands of the enraged townspeople.

He claimed that one of them was later beaten and burned to death.

The last suspect, though, was saved from this fate when the cops interfered.

The residents are dissatisfied with the relocation.

Residents pelted the police with stones and vandalized some buildings in an attempt to express their rage.

As a result, the police requested reinforcement from regional headquarters.

The suspect was escorted from the Bonsu Nkwanta police station to the regional headquarters in Sefwi Wiawso for additional investigation and interrogation.