A Volvo driver Amoatwi Phillip has caused the death of two people and injured five more after he lost control of the steering wheel to the Volvo sedan he was driving. Amoatwi was driving from Tepa to Dormaa Ahenkro when the accident happened in a suburb town called Attakrom. Attakrom is a village town within the Dormaa Ahenkro district and it is the home of the famous Yaw Opare Adinkra who owns Adinkra Group. Attakrom is a town that lies on the Tepa to Dormaa Ahenkro highway and it is filled with numerous curves because of the nature of the land.

Amoatwi who is a new driver on the road didn't see there was a sharp curve ahead of him, because of the absence of road signs. Amoatwi was driving at a speed limit of 70km/h when he saw a pothole in the middle of the road. Instead of slowing down for the pothole, he swerved the pothole in an attempt not to hit it and lost the steering wheel to the car to the curve which was directly after the pothole.

Amoatwi tried navigating the curve but the speed the car was travelling at, forced the car to move from the highway before somersaulting. The car somersaulted twice before landing on the Attakrom river bank. Three people who were walking on the road fell victim to the accident when the car crashed them on the paved road before somersaulting. Out of the three pedestrians, two died on the spot while the other are still in the hospital. None of the passengers and the driver of the Volvo sedan lost their lives apart from the two pedestrians who died on the spot. All four people who were in the car, are at the Dormaa Municipal hospital receiving treatments while the two who died have been taken to Chiraa Mortuary at Dormaa Ahenkro.

Residents blamed the accident on the lack of speed ramps that would check speed limits when entering and exiting from Attakrom. Speed ramps would have prevented this particular accident as it would have stopped the driver from dodging the pothole because of the speed ramps. Road signs, if any was on the road, the driver Amoatwi would have known there was a sharp curve ahead and he would have taken precautions before dodging the pothole which forced him to crash at the curve. 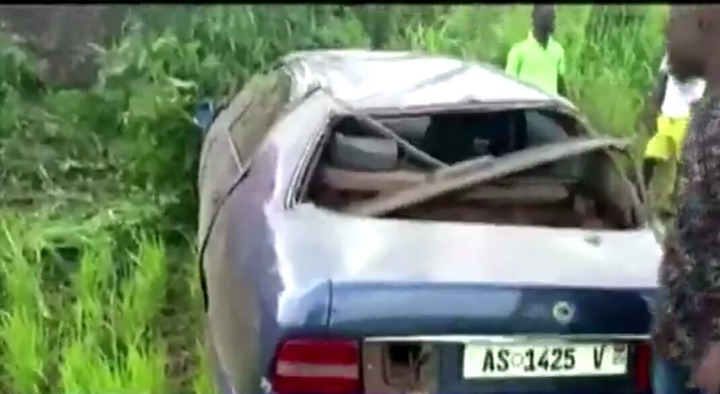