By Blind_Justice (self media writer) | 15 days ago 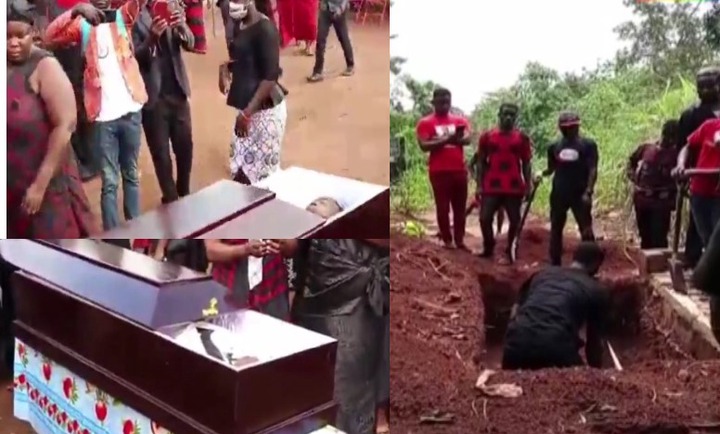 An account by the head of family for the 15-year-old Stephen Sarpong who was murdered by Richard Appiah, has disclosed that the police managed to sew the severed parts of the poor boy for burial. The head of the family, Nana, said their relative was buried without his heart, kidneys and genital, a situation he described as shameful and unpardonable.

From the coffin where Sarpong was laid, one could tell how deformed the corpse was. Many who came to mourn with the family couldn’t resist the temptation of using their mobile phones to take pictures of the lifeless body. The head of the family disclosed that the body was sawn into one piece so they could bury the remains and let the soul of their son rest.

In an interview on Nimde3 Fm in Sunyani, Nana cried that the family were saddened by the view of the body, and cursed that calamity befall any person who was behind the killing of Stephen Sarpong.

“His kidneys, heart and genitals were all taken by that Richard Appiah. The police managed to stitch the remaining parts into human-like figure so we bury him. It is sad. What that Richard has caused the family is unforgiveable. And like we said at the burial ground, justice would be served by himself and his ancestors.”

On what the family expect of the judiciary in respect of the ongoing trial of the case, Nana warned that no attempt should be made to cover up for the crimes committed by Richard Appiah. He intimated that the ghost and gods of the land shall side with the family to fight any judge or lawyer who attempts to alter the facts and free Richard Appiah.

“We have heard it all. The attempt to cover up for his crime with claims that he is mentally ill. How can someone who is insane butcher innocent boys, remove vital organs and sell them for money? Is there any element of insanity here? This is purely a cover up story. Richard is a murderer,” he reiterated.

Nana disclosed that the mother of Sarpong is traumatized. According to him, the chaos that was caused by the mother when the body of her son was laid in state was a pure demonstration of the pain she was going through.

He mentioned that both parents have never been themselves since the incident, adding that nothing could put them to rest.

“Not even the prosecution of Richard Appiah. The son they have lost has taken away everything.”