A mother slaps a police commander who was about to arrest her son.

However, when this mother realised that her child had committed a crime and that the police were about to arrest him, she went to extremes and slapped the police Commander in an attempt to prevent him from arresting her son.

According to the report sited by dapaah-gh on adomonline, the Kyebi District Police Commander, Chief Superintendent Magnus Reindorf Sam, and his officers set out on a mission to apprehend narcotics dealers in Kyebi in the Eastern Region. The Chief Superintendent and his officers were able to apprehend four alleged narcotic dealers in the Kyebi area during this operation.

The mother of one of the suspects, Frederick Sarkodie, sought to prevent the officers from detaining him, so she slapped Chief Superintendent Magnus Reindorf Sam during her struggling with him. After reportedly slapping the officer, Akua Saa, the 58-year-old mother, was overwhelmed by the officers and arrested for her actions.

Margaret, a 28-year-old lady, and Vivian Saa, a 33-year-old woman, were among the other suspects apprehended by the police during this operation, according to the report. Kingsley Sarkodie and Fiago Gilbert, 38 years old, are other suspects.

The operation, headed by the Kyebi District Police Commander and his 20 officers, was carried out to remove the ghettos that have sprung up in Kyebi, where narcotics are being sold to residents of the Kyebi District.

Instead of slapping the office, the 58-year-old mother should have let the police do their job and arrest the suspects, which included her son. And if she had intended to keep her son from being arrested by the police, she should have instead asked him to cease engaging in narcotics activities and do something legal that would have brought his family peace. 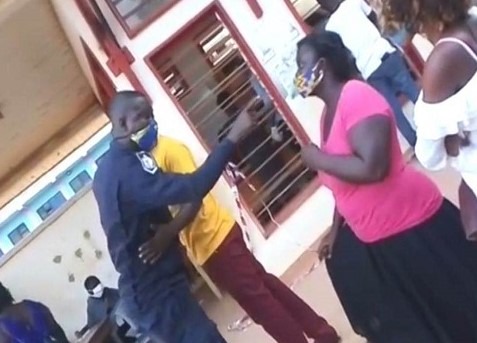 But unfortunately for her, she and the other suspect will be facing the law in court this week as a result of their actions.