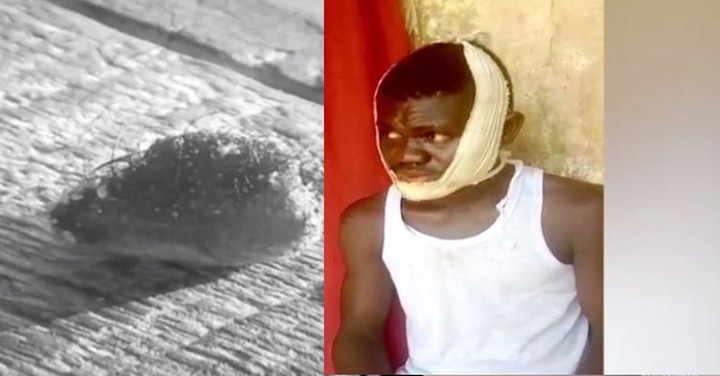 Two good friends have engaged in a serious fight over two Ghana cedis (GHC2) at Bibiani in the Western North Region of Ghana.

The fight has resulted in one of them biting off the lips of the other. Kofi Alaska and his friend, Asare had agreed to prepare food together during the Ramadan holiday.

Right after the food was ready, the two decided to go and take some liquor in a nearby spot before eating. At the spot, Asare bought a hard liquor which cost two Ghana cedis (GHC 2) and paid with twenty Ghana Cedis GHC 20).

The spot owner had no change and Kofi Alaska opted to pay for Asare. However, Kofi Alaska took the twenty Ghana Cedis (GHC 20) and decided to deduct his two Ghana cedis (GHC 2) and return the balance to Asare.

The situation did not go down well with Asare who demanded his money and that resulted in a serious fight between them.

Angel FM reporter in the area, Kofi Dzabaa who confirmed the news indicated that during the fight, Asare chewed off the lips of his friend.

“Asare and Kofi Alaska are good friends but during the Ramadan holiday, they decided to sit down and enjoy the holidays with fufu. They organized and met to prepare the food together. They decided to take some liquor before they eat the food. Asare bought GHC 2 liquor and paid with GHC 20. But the owner had no change and Alaska paid for Asare. Alaska took the GHC 20 and decided to take out his money and give the balance to Asare. That resulted in a fight and Asare bite off the lips of Alaska”. He added.

He was rushed to the Bibiani Government hospital for medical attention but doctors could not save the situation.

Alaska’s lips could be seen lying on the floor. According to the doctors, surgery is required before the lips can be restored.

In pictures that were displayed, Alaska could be seen sitting with a bandage all over his face. He could be seen worried over the incident and regrets ever engaging in the fight.

Have Fun: 10 Ways To Live Life To The Fullest Everyday