One of Dampare's Men found himself in hot waters after he was threatened with beatings at the Kwame Nkrumah Interchange. The Police Man found himself in that uncomfortable situation after a team of Environmental Health Officials of the Accra Metropolitan Assembly (AMA) stormed the area to carry out a sanitation inspection and also to assess the level of adherence to good sanitation practices over there.

The team, which also included the JoyClean Ghana Campaign, were also on a mission in the area to sensitise the squatters about the need to live in healthy environments.

Ultimately, a drinking bar operator, who seemed to be operating under unhygienic conditions was cautioned in the cause of the exercise.

This they did, didn't sit well with a man who could probably be a regular customer and was sitting under a shade nearby. He approached the team and it's officials and started a heated argument with them in support of the drinking bar operator.

His actions led the Police Officer who accompanied the team to intervene, as it was getting out of hand, which also didn't sit well with him for which reason he threatened to beat the peace officer. 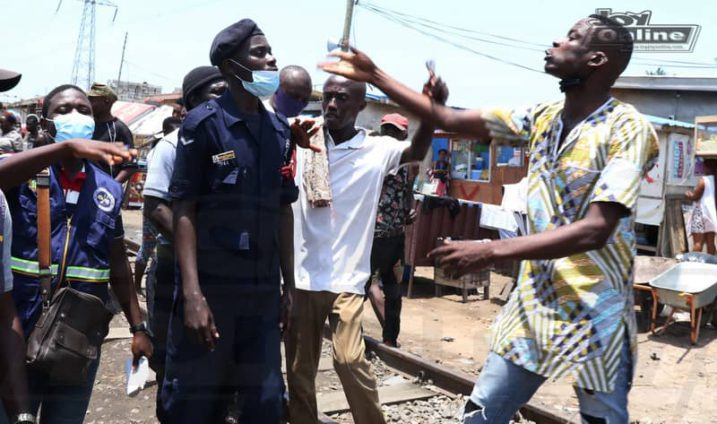 If he had assaulted the Police Officer, the man, whose identity is unknown, could have been charged with battery against a police officer or misdemeanor, and could have faced a jail term, fine or both, if found guilty by the court.

The Police are there to protect us, let's not see them as our enemies but rather, our friends.