'Come and stop me' - Tipper truck driver remanded for blocking a pedestrian road at Habitat, Konongo

By RockyJDJones (self media writer) | 14 days ago

The Konongo Odumase District Court Judge, Her Ladyship Priscilla Yeboah has remanded a 40-year-old tipper truck driver for aiding the death of two people; a couple. The driver Kwadwo Manu, a tipper truck operator at Konongo and nearing surroundings, was contacted by one Felix Opru to deliver rock chippings to his site on 18 October 2021. Felix after paying the sand driver for his merchandise, instructed the driver Kwadwo Manu on where he was supposed to drop the chippings. 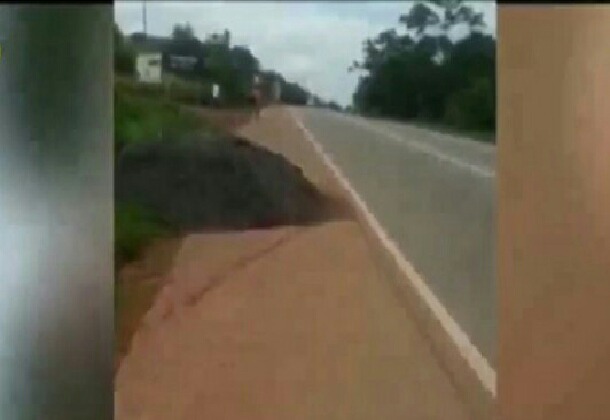 Kwadwo Manu after arriving at the site on 20 October, did not find a good spot to deliver the sand on the site. The truck which Kwadwo was driving to deliver the rock chippings on 20 October was speculated to have developed a fault at the construction site and in other for mechanics to work on the truck, Kwadwo emptied the rock chippings on the side of the road (Kumasi to Accra) at Konongo Habitat.

Kwadwo was later found to have lied to the police when eye witness confirmed the sand truck wasn't faulty at the time of the delivery of the rock chippings, but the driver Kwadwo Manu faithfully discharged the sand on the pedestrian pavement of the road because of laziness. Police of Konongo Odumasi told the District Court judge, their witness that will be available to the court during the hearing of the case even approached Kwadwo Manu when he was emptying the chippings on the road but Kwadwo ended up insulting him.

If the road belongs to you, come and stop me. Kwadwo was heard saying to the eyewitness before driving away after offloading the chippings on the roadside. The chippings which were offloaded onto the road on 20 October 2021, caused the death of Sampson Amoafo and Janet Amoafo when they were returning from the hospital on 30 October.

The couple riding on their motorcycle on the night of 30 October, fell victim to the rock chippings when they were giving way to an overtaking bus. The bus which was coming from Accra on 30 October, was making an overtaking in the Kumasi to Accra lane of the highway and that forced Sampson and his wife Janet to use the pedestrian road in other to avoid crashing the bus.

Kwadwo was arraigned before the Konongo Odumase District Court yesterday and was remanded. Kwadwo will reappear before the court on Thursday 27 January 2022 to continue the hearing of the case. The owner of the chippings, Felix Opru, a civil worker in the Eastern Region has denied knowing the chippings were deposited on the roadside since he lives out of Konongo, making Kwadwo Manu the only culprit in the case.