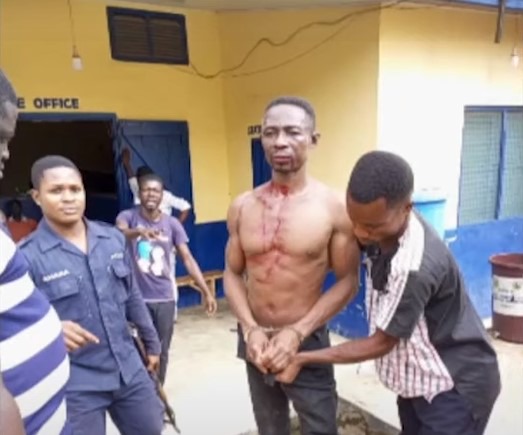 A man in Wawase in the Afigya Kwabre South District of the Ashanti Region has killed his friend. The friend’s crime was that the accused dreamt the friend was having sex with his fiancee.

Akwasi Banahene, 48 went missing. The entire community wondered why he had gone. Feared for the unknown, they decided to embark on a search. Fortunately, Banahene was found but lifeless. They saw wounds on his body that suggested he had suffered from severe, several wounds from a knife.

The news spread through the North, South, East and West of Wawase. As the dwellers lament on the unfortunate passing of the deceased, the name of a palm wine tapper surfaced to solve the puzzle.

Kwadwo Adusei, 45 has 8 children with different women. Out of these, it’s only two that he has married. While the discussion of the murdered Banahene was still on the lips of people, Adusei was heard causing atrocities in a neighbourhood.

The palm wine tapper attacked his own grandfather, Opanyin Kwabena Nkrumah, 86. On why he killed him, he explained that his grandfather has spiritually rendered him impotent.

Again, he bumped into a tenant’s house on the same compound and attacked Teacher Kwakye. Also, he explained that his grandfather after spiritually snatching his manhood from, dish it out to the teacher.

At that hour, the entire community couldn’t tolerate ‘his nonsense’ anymore. They quizzed how on earth did he think he is impotent after having 8 children from different women. They attempted to lynch him, but fortunate for him, the police came to his rescue.

He was rushed to the police station. While Adusei was narrating his heinous adventures, they found traces of the murder of Banahene. He unveiled that yes, Banahene was his friend. He dreamt and saw the friend snatching his woman from him, thus he was having sex with his wife. According to him, in the dream, the sexual prowess his friend exhibited alone could effortlessly snatch his woman from him.

As a result, assassinate him was a necessary evil. He lured his friend into his palm wine tapping site and murdered him.