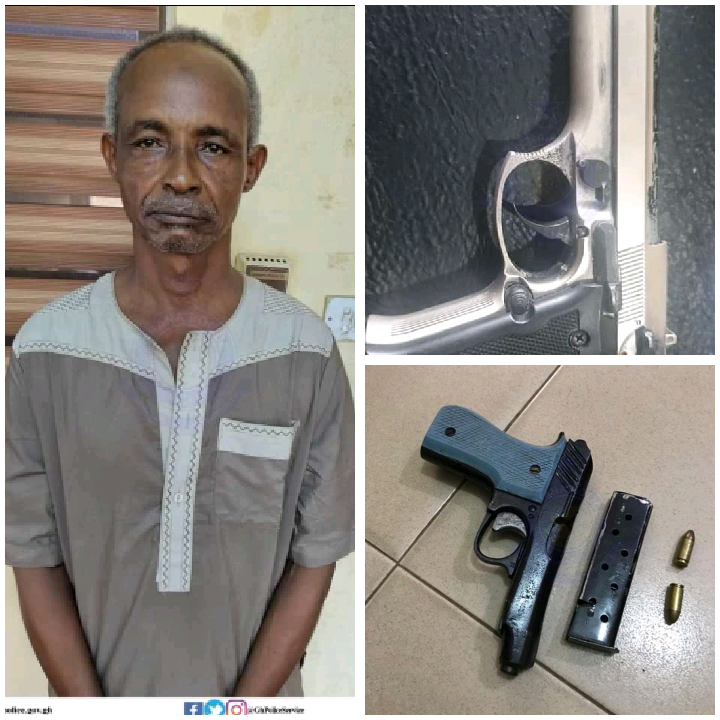 Officers of the Ghana Police Service on Saturday carried out an operation which led to the arrest of a 65-year old man, Bukari Salifu who have been financing notorious armed gangs.

Bukari Salifu, who deals in illegal arms was nabbed after he was named by two armed robbers as the one who have been providing them with illegal weapons to enable them carry out their nefarious activities.

According to the Ghana Police Service, the two suspects, Joseph Gododzo and Mujahid Abubakar were arrested when they attempted to rob commuters on the Koluedor-Sege-Accra road.

They were subsequently sent to the police station for interrogation where they identified Bukari Salifu as the backbone of their robbery activities.

The two suspects also elected to help the police arrest other members of the gang during interrogation. But upon reaching there, they attempted to escape. However, luck elluded them as they were gunned down by the police

"Under the pretext of aiding the Police to retrieve some weapons and assist in arresting their other accomplices, who had escaped, the two deceased suspects led the crime combat police team to the purported hideout of their accomplices in a bush near Zenu.

"The police came under fire as the suspect attempted to escape. The suspected armed robbers were shot in the process and were rushed to the hospital where they died", a statement by the Police revealed.