The government has promised to expand the Tema Motorway in Accra five times.

The 19-kilometer roadway that connects Tema and Accra is in terrible condition since it is riddled with large potholes and the thousands of vehicles that use it every day have washed the road markings away. 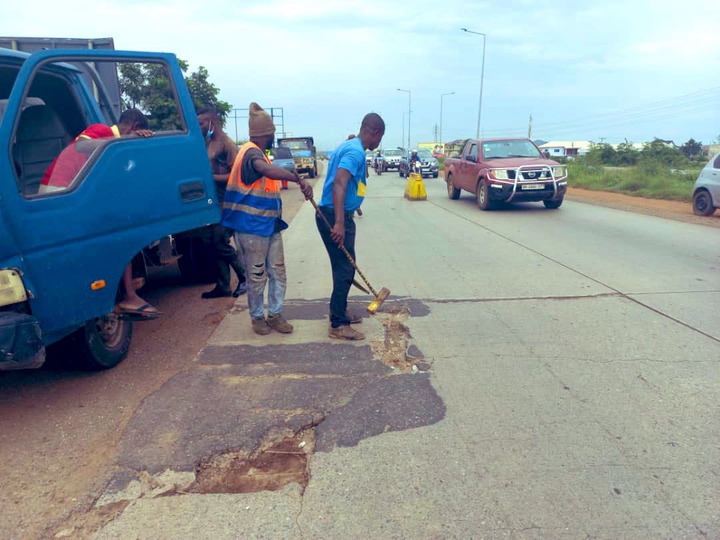 For Ghanaians who travel the route every day, the Accra-Tema highway has become a death trap.

The status of the highway might be characterized as the result of the highest level of criminal carelessness on the part of those in charge of maintaining it.

It is impossible to overstate the economic significance of the motorway because it serves as the primary route for the delivery of commodities to Tema Harbour as well as for the transportation of passengers and cargo from Accra and the countries to Ghana's east to the Volta and Northern Regions.

The upkeep of the highway has been ignored by both the current and previous governments.

The NDC failed to keep its 2009 promises.

The motorway would be expanded into a six-lane roadway, according to a 2009 commitment made by the late President John Evans Atta Mills' Roads and Highways Minister.

Since Joe Gidisu, the previous Minister for Roads and Highways, revealed in 2012 that the Tema road would undergo a significant extension under the John Mahama administration to reduce traffic, the government has made promises, but nothing has materialized.

According to Gidisu, a three-lane road will be in place from the Tema roundabout all the way to the Shai hills. Under the NDC administration, Joe Gidisu's pledge was broken. Seth Terkper, the former finance minister, also assured Ghanaians in 2015 that work on roads connecting the Tema Port to the highway was proceeding. But since 2012, the NDC's pledge to widen the road has not been fulfilled. Mahama reaffirmed the government's resolve to turn the four-lane Tema motorway into a six-lane highway. He said plans to build four container terminals, a road connecting the ports to the highway, and a six-lane expansion of the highway are well in progress, he said.

At the opening of the Kwame Nkrumah interchange, Mahama discussed the nation's progress in building its road networks. He said: "Routine maintenance works were carried out on 4,819KM of the trunk, 5300KM of feeder, and 5200KM of urban road networks, while periodic maintenance activities comprising of recovering, spot improvement, and resealing works were carried out on 9.4KM, 252KM, and 2400 meters of the trunk, feeder, and urban roads respectively." The NPP government promised in 2017 to make appointees of the President under the current Fresh Patriotic Party (NPP) administration appear to Ghanaians who travel the path of new hope.

The Accra-Tema expressway is lined with squatters, but the Ministry of Roads and Highways 2017 promised to remove them.

Squatters are still living alongside the motorway, but it is anticipated that the exercise will be finished by April 2018 to make room for the highway's extension.

This was a previous hint from sector minister Kwasi Amoako-Atta that the action would guarantee a speedy expansion of the highway.

The endeavor to widen the highway to six lanes will take 30 months.

The government will enlarge the road to six lanes, Anthony Karbo, the deputy minister for roads and transportation, also said in 2018.

Karbo also made a suggestion that the Tema motorway tolls now being collected might be reviewed by the government.

He explained the plan to extend the Accra-Tema motorway into a six-lane expressway to Accra-Class FM.

"This will [handle] the demand that will result from the port expansion, which means more vehicular traffic and, of course, the government will have to make a political choice on what type of tolls we will be charging on this route,"

Later, Karbo blamed a lack of funding for the government's failure to repair the Tema motorway.

He claimed that the Road Fund, which was created especially to finance national road construction, lacks the funds to do so.

"The loan has begun to take effect, and releases to the road fund have been seized." "We are powerless." We are in a very challenging circumstance. We all regularly utilize the route, and my ministers have had restless nights, "he added. Amoako-Atta states that the Accra-Tema highway will be fixed in 2019. Amoako-Attaagain promised that the four-lane Tema motorway would be widened on Friday, January 25, 2019. He asserted that the NPP government was dedicated to overcoming the challenges posed by the significant encroachment of the reserve zone on the highways leading from the Tema Port to the motorway.

He revealed this while touring a few project locations in Accra along with Anthony Karbo, one of his deputies, and a few directors of departments within the Ministry.

Amoako Atta warned against constructing on or adjacent to road reserve zones and warned that the government would retaliate mercilessly against any organizations or people who disobeyed the legislation.

"This generation is fighting for resources and abusing the environment as if there is no tomorrow," he remarked. We wouldn't have anything today if Dr. Nkrumah and our ancestors had acted in the same manner.

Amoako-Attah stated that the road would be upgraded to 10 lanes in 2022.

The Tema motorway will be expanded into a 10-lane roadway, according to Minister of Roads and Highways Kwasi Amoako-Attah.

According to Amoako-Attah, the action reflects the government's dedication to making improvements to the nation's road systems.

Amoako-Attah stated, "The future program is to expand the present freeway to a 10-lane," while addressing Parliament on Friday, June 17, 2022.

Three urban motorways, access control, a freeway, and numerous footbridges for pedestrian crossings will be included.