Motorcycle rider to be fined after disobeying a police command

Motorcycle rider to be fined after disobeying a police command 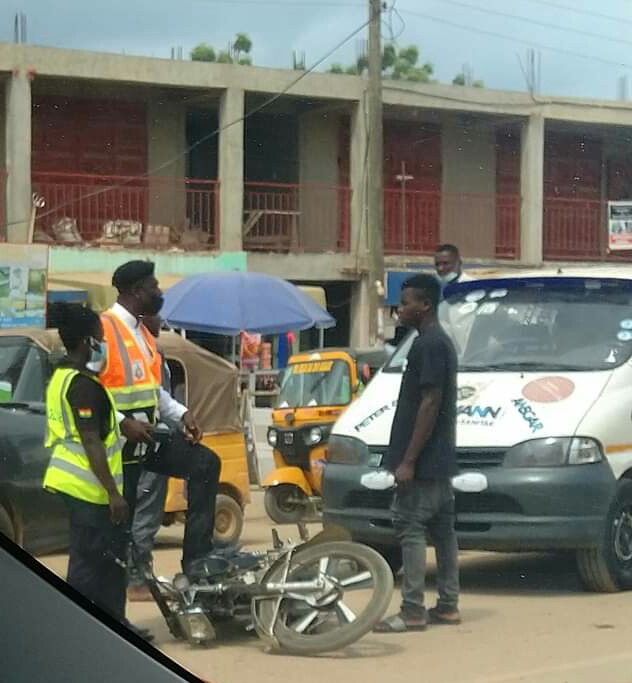 Azziz Alhassan has found himself in the grip of the law this morning after he disobeyed an off-duty police command, and traffic rules for three consecutive times before he was apprehended by two MTTU police officers on the Kwadaso road. Azziz was on his way to Kwadaso Habitat, a community within Kwadaso when he got himself arrested. He had taken a parcel from his boss at the Gee Roundabout and was to deliver the parcel to a woman at Kwadaso. Azziz after taking the parcel at Gee Roundabout made a silly u-turn right at the roundabout without thinking of incoming car or pedestrians. He almost got hit by a taxi and even insulted the taxi driver for trying to kill him. The taxi driver who had a passenger in the taxi did not voice out his anger and kept driving. Not knowing the passenger in the taxi was an off-duty police officer.

The officer who was sitting at the back of the taxi kept looking through the windscreen, recording all that Azziz was doing on the road. Apart from making a wrong turn at gee roundabout, he disobeyed three other traffic rules before getting to Kwadaso. Just before the Bantama traffic light, at the Petrosol Filling station was where Azziz failed to allow the traffic lights to turn green, before he went onto the main road leading to Kwadaso. He crossed another car at the Goil Filling station and kept using the middle lane of the road instead of using the correct lane. Police Officer Raymond Afful made calls to Kwadaso MTTU and reported Azziz to them when he found out he was heading to the town. The call which the police officer Afful made, gave the taxi driver a hint of who his passenger was and kept following Azziz so he doesn't lose track of him.

At Kwadaso agric junction was when Azziz tried making a wrongful overtaking which could have caused his death. He didn't see the car on his right and tried bypassing the car he was following without knowing an incoming car was fast approaching. He even insulted the off-duty police officer when he shouted at him to stop careless riding, but Azziz never gave heed to the advice and shouted back at the office without knowing he was an off-duty police officer. The off-duty officer Afful felt insulted and crossed Azziz with the taxi and self arrested him. Things became offensive between Azziz and the off-duty police officer when he arrested him that, on what grounds he had to prevent him from moving.

Officer Afful did not show Azziz he was a police officer until the personnel from the Kwadaso Police MTTU arrived and confiscated Azziz's motorcycle for wrongful driving and disobeying traffic rules. Azziz tried explaining to the officers that, the man Afful had molested him on the road, but the taxi driver who was driving the man revealed to Azziz that, he was an off-duty police officer not just an ordinary person before he was able to calm down. Azziz will be fined 300¢ for driving in wrong lanes, 200¢ for wrongful overtaking and an additional 200¢ for endangering other motorists on the road. In all, he will have to pay 700¢ before he will be allowed to have his bicycle back. Azziz will also sign a bond of good behaviour on the road with the Kwadaso police before he will be released. Off-duty Police Officer Afful Raymond who caused Azziz's arrest before handing him to the MTTU officers, recounted how happy he was after Azziz was fined. It will serve as a warning to other motorist not to play on the road he said. 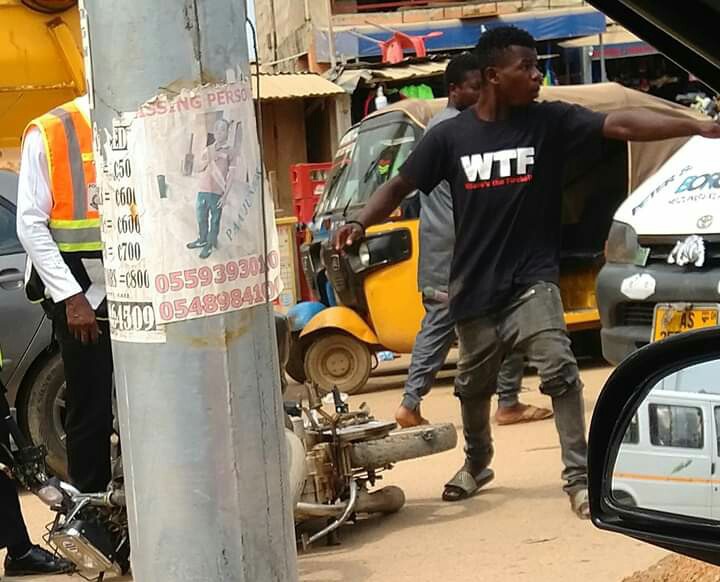 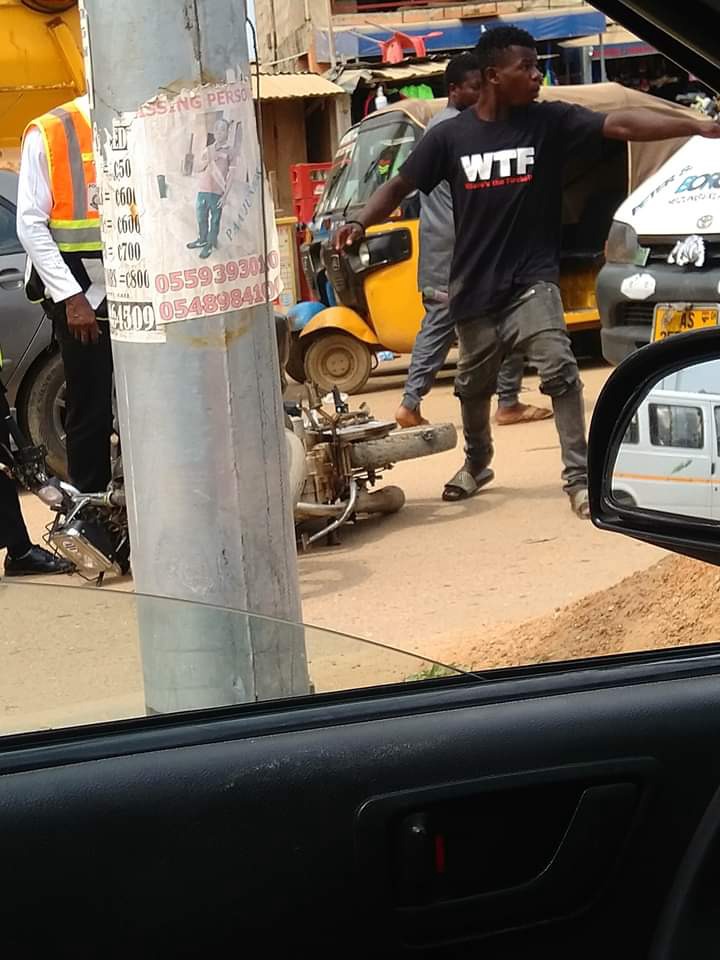 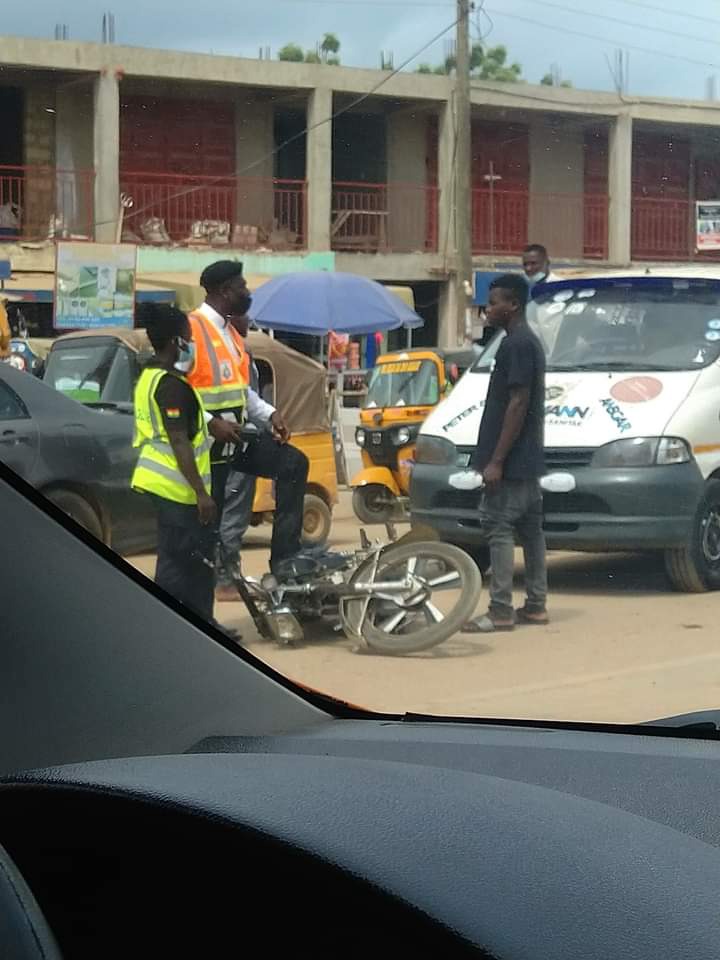