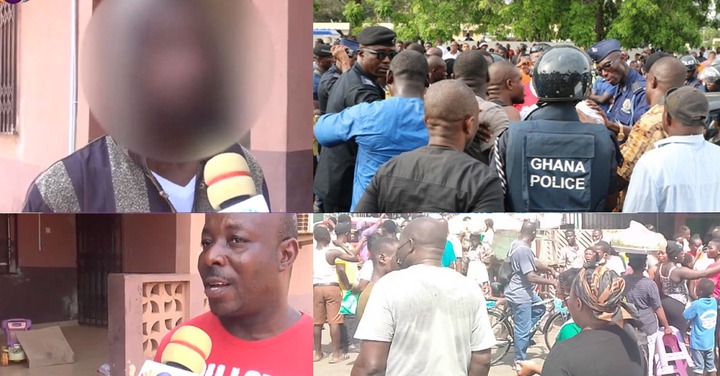 It was a decision to either bring more money or risk losing his one-year-old son through gunshot. Sadly, the young man who prefers to remain anonymous for security reasons had already given out all the money in his possession to the armed robbers and had nothing left, the next decision was how to save his son.

In all, three armed robbers stormed one of the zones at Tantra Hill in the Greater Accra Region for operation. Two of the armed robbers had no masks but the fearless gang leader showed his face.

They moved from one room after the other and started terrorizing the residents, their aim was to get money and other valuables or kill. It was a matter of life and death for the resident. A young man who was in his room with his wife and one-year-old son had the saddest experience of his life when the armed robbers found their way there.

Looking at the demeanor of the armed robbers as monitored by the young man, it was clear that they had taken drugs and were intoxicated. This was a clear indication that they will not spare anyone who comes their way. They took all the money on the young man, locked him, and left but promised to return after thirty minutes.

Truth to their words, they were back to the man and his family after robbing other residents. This time around, they needed more money or take the life of his son. There was a third option. the armed robbers told the man that they could also take his son and sell him. The traumatized father could hear the gang leader asking Awudu to ensure it is done, but a miracle happened. The man who was scared to lose his son pleaded with the armed robbers to spare the life of his son because they had taken all his monies already and has nothing left on him.

The armed robbers later realized the man was speaking the truth and decided to leave. God being so good, his son was saved but later heard gunshots in the room of another neighbor. It was the life of Stephen Akowuah, a physical instructor that had been taken. The police were subsequently called to the scene and investigations have begun. Other neighbors who were scared of the incident called on the police to provide security in the area.

It might be through the making of God that made the armed robbers spare the life of the one-year-old son and even his father. intoxicated armed robbers could have also taken the baby away and sell him for money.