According to police in the Bono East Area, gunmen shot and killed a man in his 30s during a robbery attack on the Atebubu-Kwame-Danso highway. 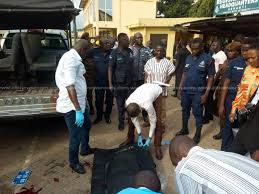 Elijah Asante, a headteacher at the Bantama S.D.A Basic School in the Sene West District, about 143 kilometers from the regional capital Techiman, was identified by police.

On May 7, the victim was returning from a teacher's workshop at Kwame-Danso when he was approached by an unidentified gang.

He was shot in the head and died on the spot. Witnesses told dailymailgh.com that armed soldiers caught up on the scene interrupted the activity.

“We've beefed up patrols [in the area]... We were able to make contact with his family after some time. Some people were able to recognize him as such. Our investigator arrived on the scene, processed the crime scene, and has since deposited the body at the Sene West Government Hospital, according to the police chief.

A wife and three children were left behind by the victim. The robbery incident on Friday brings the total number of robberies in the Sene West District to three in the last two months.

According to a police incident report, the crime scene has also been designated as a robbery hotspot.

Residents have also urged the government to repair the deplorable Atebubu-Kwame-Danso lane, which has recently been the scene of robbery attacks.

"President Akuffo-Addo Is just not thinking about the next generation of Ghanaians,” - James Gunu