Ashanti Region: Man kills friend he saw in a dream sleeping with his wife 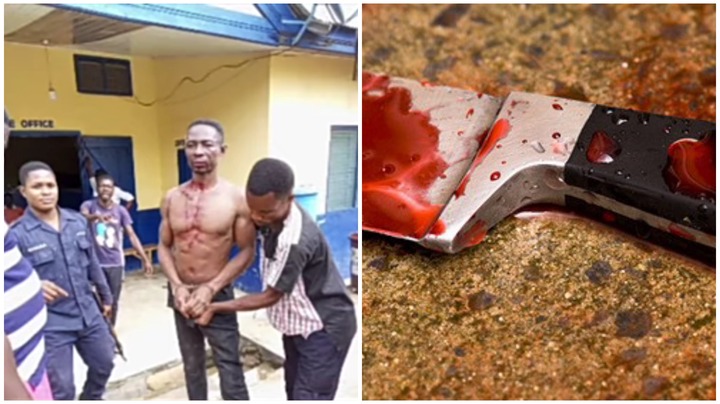 Kojo Adusei, also known as "Desco" is in police custody for allegedly killing his friend and two others at Wawase, Afigya Kwabre South district in the Ashanti Region.

According to report, the 45 year old palm wine tapper, Kojo Adusei denied killing Akwasi Banahene, the said friend he saw in a dream sleeping with his wife.

Akwasi Banahene, who is 48 years old was found dead last week Thursday in a bush after being declared missing by the community. The deceased was stabbed severally on parts of the body in the bush.

The suspect, Kojo Adusei has 8 children with different women and lives with two of them.

On Friday morning 8th October, 2021, Kojo Adusei also known as "Desco" from nowhere entered his 86 year old Kwabena Nkrumah's (grandfather) room and stabbed him for allegedly taken and given his manhood to someone.

Finally Kojo Adusei was arrested but unfortunately the two, Teacher Kwame Kwakye and Kwabena Nkrumah (the grandfather) died in ankaase hospital on Sunday.

According to the people in the community, Kojo Adusei who denied killing Akwasi Banahene had earlier said he had a dream, and in the dream, the deceased, Akwasi Banahene was sleeping with his wife and he feels if he doesn't kill Akwasi Banahene the dream can happen in reality.

Report says Kojo Adusei convinced Akwasi Banahene and took him to the bush where he does his palm wine work and stabbed him severally on parts of Akwasi Banahene's (the deceased) body till he died.

Also, Kojo Adusei before he got arrested wanted to stabbed and kill the wife of Teacher Kwame Kwakye but was prevented by the youth in the community as they grabbed him and beat him up before the arrest by the police.