By Dailydiary (self media writer) | 7 months ago 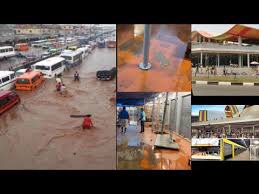 As the country approaches the peak of this year's rainy season, the Ghana Meteorological Agency is advising individuals living in rivers and the homeless to seek shelter elsewhere.

Four individuals have died in the Ashanti Region as a result of severe rains that flooded areas of Kumasi and its environs.

Thousands of Ghana Cedis worth of property has also been destroyed.

According to Joseph Tetteh Portuphy, Head of Forecasting at the Ghana Meteorological Agency, such people can return after the rains stop.

“Since we are in the midst of the rainy season, what we want to urge is that those of us who live in flood-prone locations should move,” says the group.

“This is because if you live there and it rains, there will be flash floods, which could ruin your property and even take your life,” he explained.

On Tuesday, June 22nd, two-year-old Mohammed Awal was swept away by flooding in Sawaba, Ashanti Region.

Even as traders defied the storms and attempted to save their properties, the rains inundated the freshly built ultramodern Kejetia market.

Three people were discovered dead in the Ashanti Region on Sunday, June 27th, after the rains had stopped.

At Aboabo Pelelee in the Ashanti area, police and NADMO discovered the body of a man in his thirties.

The worst-affected places were Teshie, Kasoa, and sections of Haatso. Residents in Teshie are calculating their losses, blaming the situation on an ongoing project in the region.

At Weija Barrier, roads were clogged with mud that had fallen down from the area's mountainous areas, stranding several vehicles and caused significant traffic congestion.

After years of complaints and neglect, residents are demanding immediate action.

Content created and supplied by: Dailydiary (via Opera News )

Appiatse Explosion: The union advocates for a national focus on health and safety