Ashawo Market Accident: Heartless Driver Arrested After Failing To Pick Up Woman He Knocked Down

By Blind_Justice (self media writer) | 11 days ago 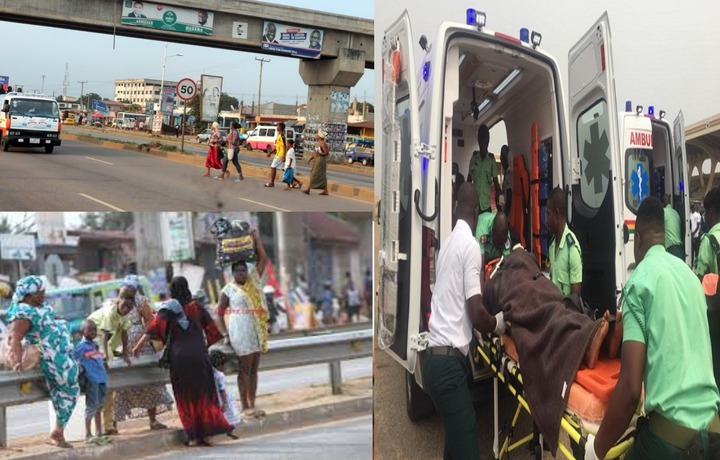 The Police at Lapaz did not hesitate in arresting a reckless and heartless driver who knocked down a woman believed to be in her early 40s, on the Lapaz Ashawo market area. According to reports, the driver was speeding in his KIA truck with registration number GT 3319-Q on the highway.

The victim, who admittedly was deviant, ignored the use of the footbridge to walk just beneath it so she could reach out to a vehicle on other ends of the road. In her reckless behaviour, she hastens her pace in an attempt to cross the road but got stuck in the middle due to the speed of an approaching vehicle.

Okay FM’s reporter, Jacob Kubi says that the truck driver who was a few meters away from her got confused by the back-and-forth movement by the poor woman in the middle of the road. In that confused state, the driver accidentally knocked her down.

She got her head knocked against the ground and her limbs crushed. There was not a single screaming, a situation that many feared was evident the woman died in an instant.

Eyewitnesses persuaded the KIA driver to pick her up and take her to the nearest hospital for emergency care but he did not oblige. No one could understand his motive, and yet no amount of convincing could get him to show some humanity in saving that dying woman.

According to Jacob Appiah, the actions of the driver infuriated some people and they nearly lynched him. The police were quick to respond to the situation and an arrest was made on the driver.

Another vehicle was arranged to transport the woman to the hospital in an attempt to stop the injury from worsening. But many feared she cannot make it. Nothing has been heard about the current state of the woman since yesterday evening when the accident happened.

Look at What is Happening at Sunyani Wednesday Market.

Lawlessness In Commercial Drivers Strike; Dampare Must Intervene Before Things Get Worse