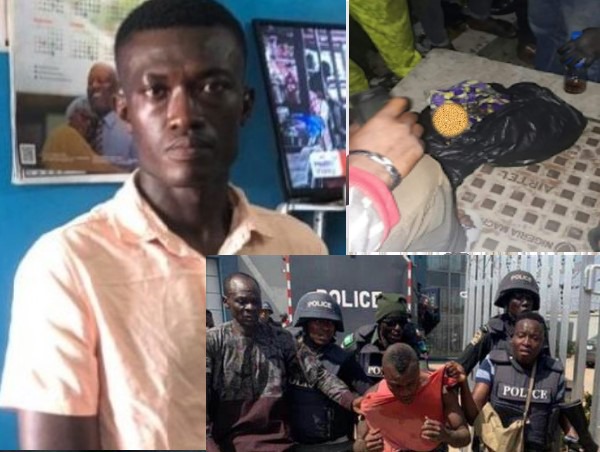 The Forensic Team of the Ghana Police Service has uncovered the remains of the butchered kids by suspect Richard Appiah. The remains were tied up in polythene bags and buried at some spots in the compound and behind the household.

Angel News’ reporter Akwasi shared that the police officers were led to these locations by the suspect. He indicated that the remains that were tied up in the polythene bags were mainly the guts of the victims.

He noted that other human remains were also retrieved in a pit which dug in the bush close by the house. In his assessment of the environment, Akwasi indicated that suspect, Richard Appiah could have done worse to hundreds, given that “there are no occupants in the compound and the house was just by the bush.”

Asked if the suspect had named any other accomplices to that heinous crime, Akwasi replied that the police is controlling information about their investigations such that other suspects don’t run out of their ‘radars’. He mentioned that the entire compound has been locked up and heavily guarded by armed officers to avoid any intrusion that could compromise evidence.

In the meantime, the families of the victims have been assigned to a clinical psychologist to help them through this traumatic experience. They have however insisted that the Police hands over the remains of their children so they perform the necessary funeral rites to put their souls to rest.

This request may be difficult to be honoured as investigations haven’t completed yet. So far, Richard Appiah hasn’t been processed for prosecution yet. He might be charged for man slaughter and other crimes as proscribed in the Criminal and other offences Act 2012 (Act 849 as amended).

The story has provoked several Ghanaians as some had even suggest that the state orders his execution for the crimes committed. The families of the kids could hardly make a pronouncement of the judgement they wish for their lost one.

In the face of these outcries are allegations that the suspect was trading in human parts and has a list of other victims which the community doesn't know of. His last conversation on Facebook had triggered speculations that confirms this belief.