A 20-year-old Ghanaian lady tosses her 3-month-old twin sons down a well.

By Dewriter (self media writer) | 1 month ago

A 20-year-old lady was detained by the Bono Regional Police Command for reportedly tossing her 3-month-old twin infant boys into a well.

Ellian Zumeseh, the culprit, is accused of committing the crime in Mama Lawson, a suburb of Sunyani Municipality in the Bono Region.

The dead remains of the innocent twins were recovered from the well and transported to the mortuary by law enforcement personnel. 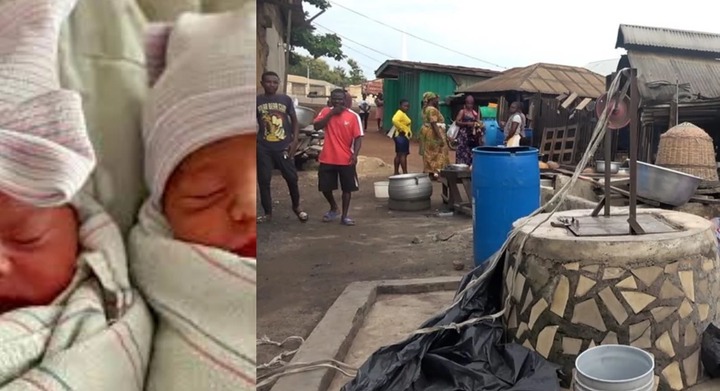 "She was arrested and taken to the police station." Following us here, the cops arrived and brought the infants to the morgue. We will sign paperwork tomorrow [Thursday], according to them, so that the remains may be released for burial before she is taken to court. She is sane and has no problems. Cecilia Dumpaka, a businesswoman whose employee's daughter is accused of the crime, told citinewsroom.com, "I am amazed at what she has done."

Cecilia described the events as follows: "I live in Penkwase, so about 2 a.m. today, I received a call from my sleeping children at work, telling me that the daughter of one of my colleagues had drowned her twins in a well. So, I departed at 2 a.m., and it was true when I arrived. We contacted officers who live in the neighborhood."

The event was confirmed by the Bono Regional Police PRO, ASP Augustine Kingsley Oppong, according to the news website.

"Around 2:00 a.m. on May 24, 2022, two police officers led a woman to the police station who was thought to have given birth around three months prior and dropped her two infants in a well. As a result, the police launched an inquiry right away. We dispatched our personnel to the location to assist and follow up.

"We can affirm that after transferring the twins to the Bono Regional Hospital, the doctor on duty, Dr. Amoako, verified that they were declared dead on arrival," the police chief added.

Residents in the town are confused as to what may have pushed the suspect to perform the claimed crime because she was not known to have any mental health concerns before to the occurrence.

Meanwhile, ASP Oppong stated that inquiries into the suspect's motivation had commenced.

Content created and supplied by: Dewriter (via Opera News )