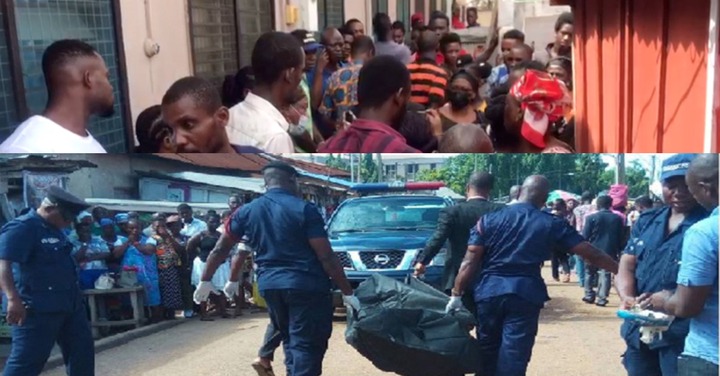 The morning of Saturday, April 24, 2021, will forever remain in the memory of residents living in Shama Kumasi, a community in the Shama District of the Western Region of Ghana.

A forty-year-old man, whose name has been given as Papa Gyabi is in the grips of the Shama District Police Command for allegedly killing his girlfriend (Rita) who is believed to be in her early twenties.

According to reports from the community, Papa Gyabi is married with a kid and the wife has traveled for about one month.

The reports further indicate that Papa Gyabi already has four children with another woman but that marriage, according to sources has collapsed about four years ago.

It is also alleged that Papa Gyabi met the new girlfriend who resides at Daboase in the Shama District of the Western Region a few days ago and both agreed to spend some good time together.

Papa Gyabi, who happens to be a popular landlord in the community invited his girlfriend (Rita) over and in the process, a misunderstanding occurred.

The girlfriend, according to reports did not take matters lightly and started engaging in a physical fight with her boyfriend.

In the instance, Papa Gyabi who was holding a hammer pushed the girlfriend to a wall and that ended her life instantly. She is said to have hit her head on the wall.

Papa Gyabi is currently in the grips of the Shama District Police Command. The Criminal Investigations Department (CID) unit has taken over the issue.

According to reports, the entire community is in a state of shock. Some eyewitnesses who were at the scene indicated that they heard a noise in the room and wanted to intervene but it was locked.

“I heard the noise in the room. I stood at the window and pleaded with my landlord to stop but he could not listen. I wanted to push the door but realized he was holding a hammer and that prevented me from going further. Before we could save the situation, the young girl was already dead”. Nana Aboagye, One of the tenants in the house narrated.

Meet The Twins Causing Confusion Online With Their Hot Photos. Checkout Their Photos