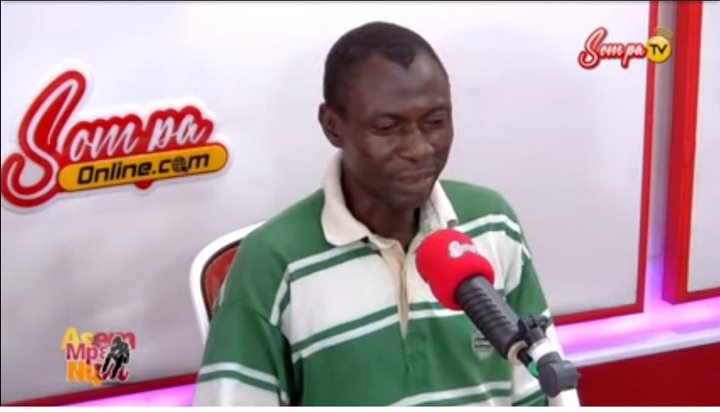 Kofi Owusu, a man who hails from Manso in an interview sadly recounts why his brother doesn't want him to stay in their mother's house. According to the man he was staying with his wife in his family for many years before he travelled out of the country. Months later his wife called to inform him that, his brother has taken off the roofing sheets from their mother's house claiming that they are doing renovations.

The painful part was that his brother didn't informed his wife to remove their belongings from the house before doing that work. Owusu said most of their belongings got spoiled because of that. His wife has to packed few of their things and went to stay with their neighbours. The man added that when he came back Ghana he asked his siblings why they did renovations whilst his wife was still staying in the house.

But they did not give him any explanation. His brother then warned him never to set his foot in the house because his wife has not been staying peacefully with their family members. Owusu said he asked his brother why he didn't settle the issue between his family members and his wife but rather sacked them from the house. The man said his brother rather threatened to arrest him if he tries to go and stay in the mother's house again.

Owusu was surprised because his own brother has decided to do this to him, the brother even think of the children he had. Owusu again said he informed his 91 years old mother about what is going on, their mother advised him to build his own house at their backyard to prevent those misunderstanding between them, Owusu didn't keep this discussion for himself but voiced out to his brother about the decision they have taken. This time around too his brother told him not to even build any house on the land.

Owusu said he made up his mind to go ahead with his decision, he bought a trip of sand and cement. He then hired a Maison to start his building but his elder sister fought with the Maison till he stopped the work he too has no place to stay. According to Owusu's mother, the house belongs to all of her children but it is so sad that those children don't want to stay together with Owusu.

The woman continued that they are all siblings from the same parents but they have been fighting among themselves because of the house. The woman concluded that she wants peace among her children still they keep on fighting due of the house meanwhile it can accommodate all of them.