"This Is Even Better?"-Ghanaians React As This Policewoman Was Captured With This Dressing 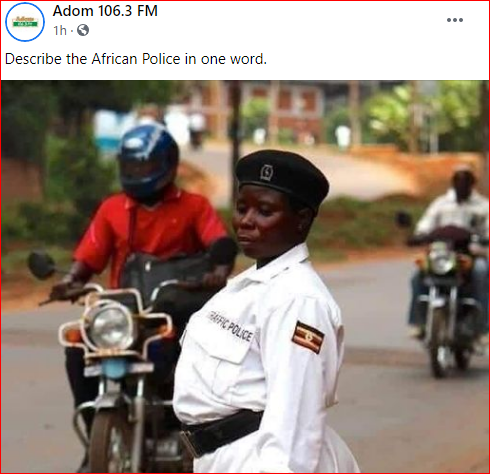 Some Police Services in Africa seems to sew oversized uniforms for their officers. Some people are of the view that some of these Police personnel sew their own uniforms because the government refused to provide them with adequate uniforms for their job.

The woman in your picture below is a Ugandan Policewoman and not a Ghanaian Policewoman but this was posted on Facebook by Adom 106.3 FM with the comment "Describe the African Police in one word". Some Ghanaians burst into anger as they ask Adom FM to caption their post well because you boldly see Uganda national badge on her arm. The uniform also shows that she is a traffic police officer.

Some Ghanaians argued that Adom FM generalizing the photo as 'African Police' makes their post ridiculous because Africa is not a country but a continent with many countries. Some people will ask, what is wrong with her dressing that made Adom FM post the picture on Facebook?

Looking at the picture carefully, you could notice that the uniform is oversized that is bigger than the woman. Some Ghanaians argued that a Policewoman should look smart and fearful but this Uganda Policewoman looks sexy and funny. Others said she is heavily endowed with a huge chest and backside that why maybe they gave her an oversized uniform.

Some drivers, motor riders and road users sometimes get distracted when they see a woman heavily endowed with a huge chest and backside that may be the reason why Uganda Police decided to give this woman an oversized uniform. 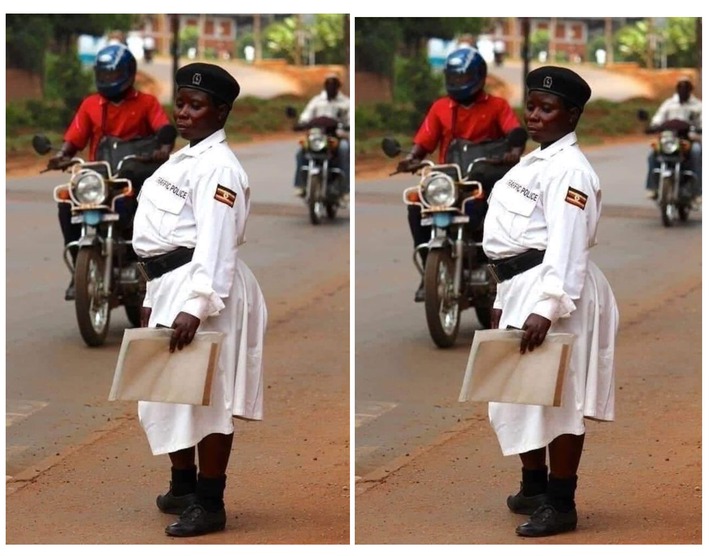 Check out comments from some Ghanaians below on this picture:

A Facebook user known as King Shaka reacted that "This is better...at least the sun will not disturb her like those in black" 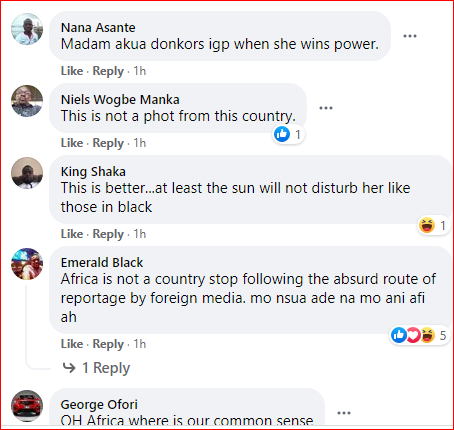 Another Facebook user known as Gilbert Koffie said that "I'm disappointed after reading some comments. It's not all police who should dress to look smart and fearful. The police as a body, have various divisions and categories, based on the tasks they perform. Hence their differences in the outfit. You can see traffic police boldly written on her chest. Some of the police are not in the service to arrest.

They are there to keep the peace. Should in case you have a fight with another driver and you see this, excuse to say "funny" police officer, coming to calm you down, won't you smile, laugh and forget all hurts? Please let her do her work in peace". 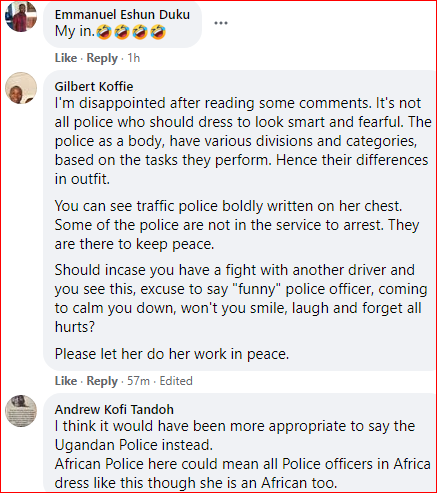 Adom FM Africa African Police Ghanaians This Is Even Better