By Discoverers_Gh (self meida writer) | 26 days 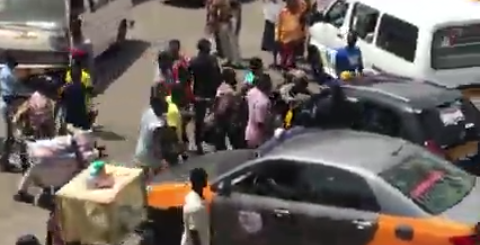 Two robbers, armed with knives and a gun without bullet, were apprehended on Wednesday, April 14, 2021, at around 3pm at the second biggest market in Ghana, the Kejetia market in Kumasi, the capital city of the Ashanti Region.

According to information gleaned from the eyewitnesses this afternoon, the armed robbers were actually targeting a mobile money vendor located in one isolated place around the market.

After several attempts to carry out their operation, the robbers finally got a chance. They plunged the shop of this innocent man, pegged him to the floor while threatening to kill him with the empty gun and the two sharp knives found on the hand of each one of them.

They took all they wanted—the cash available for cash out transactions, the mobile phone for the mobile money operation, and the personal phone of the vendor himself and left off hurriedly.

However, because of the number of people around, the victim (called Yaw), notified some of the market people around who chased the robbers live on the road. 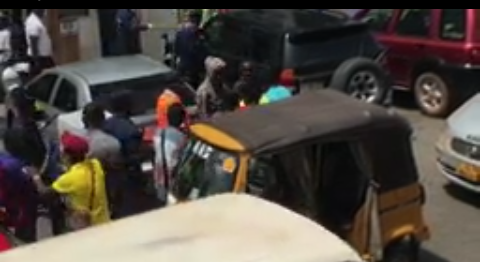 However, a driver who was passing by nearly knocked both of them (the robbers) down, and so the rather unfortunate incident on their part slowed down their speed and gave the opportunity to the chasers to capture them.

According to eyewitnesses, the two robbers were beaten and maltreated by the people of that side of the Kejetia market before they were finally transferred to the police station.

After they were caught, they discovered that even though the gun they were carrying was a real one, it has no bullet and hence just used as a life-threatening weapon to successfully carry out their operations. 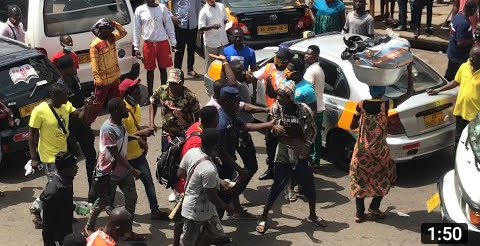 A police officer who came to the scene told the people to expel all kinds of fear and intimidation and be courageous in whatever they may find themselves. He also relayed the information about the fact that the gun used by the just captured robbers were without bullets.

He told them to be each other's keeper. And that they should apply the principle of checks and balances on each other even as they sell in the market. He also especially commended the brave men who ran after the robbers and captured them.

Anytime armed robbers attack you, don't try resisting else you will get yourself killed. Instead exercise patience, bravery and smartness and you may get them captured.

Photos: Man burnt while being anointed by a prophet.

Saddest football story ever- The Man that was killed because of an own goal.