By EricMurphyGh (self media writer) | 2 months ago 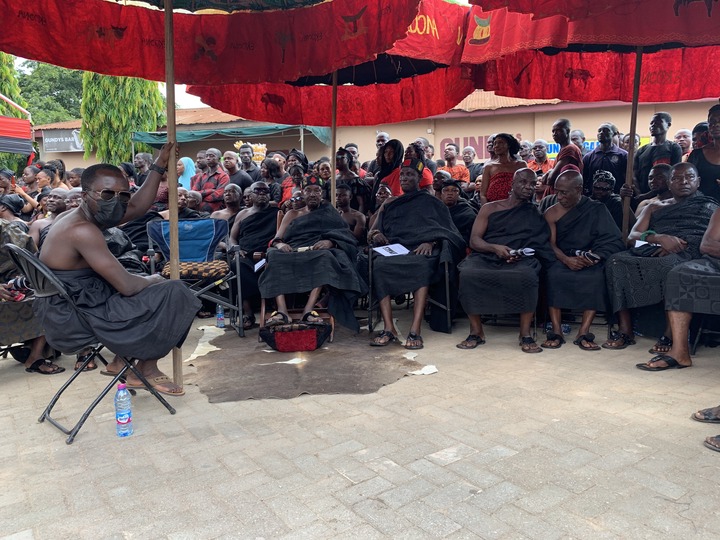 Hundreds of mourners have thronged Asokore - Mampon Durba grounds for the funeral and burial service for the late legendary Journalist, Stephen Yeboah Afari Ketekyew, known publicly as Mmrantehene or Man 88, who died on Saturday, September 17, 2022, at the age of 70.

The burial and final funeral rites of the broadcast journalist will be held today (Thursday) in his hometown, Asokore Mampon, in the Ashanti region.

In attendance were Hon Kyei Mensah Bonsu; the minister in charge of government business, MMDCES; Chiefs.

Others were members of the various media houses across the country, his former employers, family, friends, and the general public.

The atmosphere was one of grief, as many mourners shed tears as they filed past the remains which lay in a royal state in a coffin.

Red and black colours dominated the premises. Many others were in customized cloth made for the late Journalist. The love Band treated the mourners to great tunes and drives with artists like Mama Esther, Shadrack, Akua Afriyie, and many others.

Tributes were read by the widow, children, family, and Sompa Tv (Teraone Media), among others.

In a glowing tribute, the general manager of Teraone Media, operators of Sompaonline.com, Sompa Tv / Fm, Mr. Collins Amo-Poku said: ‘’Talk of wisdom and knowledge of radio and one of the people whose name would be on the lips of every Ghanaian would be Mmrantehene Yeboah Afari Ketekyew Barima.

‘’Indeed, the outpouring of grief by many Ghanaians following the news of his death, is an appreciation of the impact his journalistic work had on successive generations of Ghanaians. He was one of Ghana’s media icons and undoubtedly, a legendary broadcaster whose radio humor transcended our regional borders.”

The general manager said the late Nana Akwamuhene believed in the vision for the transformation of the Teraone media brand and assisted him tremendously on countless occasions.

For that, Mr. Collins Amo-Poku said, he and the Teraone media would remain eternally grateful to the departed broadcast journalist.

’His was a life well-lived, and he will be sorely missed by all who had the opportunity and privilege of knowing and meeting him,’’ he concluded.

In his tribute, the chief of Asokore Mampong, Nana Boakye Ansah Debrah praised Nana Akwamuhene for his immense contribution to the growth of the Asokore Manpong community over the years, especially his linguistic role in the establishment of a solid custodian of the Asokore manpong stool land.

Wreaths were laid by the Teraone Media and People of Ghana, the widow, children, family, church, and traditional authorities. He worked at a state construction corporation before he became the secretary to the Town Development Council Committee.

He then proceeded to work with Otec Fm as a news caster and the host of Awarepa Y3 Anibere.

He then moved to Fox Fm and to New Mercury where he became the general manager and host of socio-political morning show, few years later, he returned to Fox Fm as the programs manager and Sompa Fm under the Teraone media.

He established himself as an iconic figure in the media industry, the humor and passion he worked with made him stoodup among his competitors.

Mmrantehene before his demise was married to Mrs Harriet Afari Yeboah, leaving behind 17 children and over 25 grandchildren.