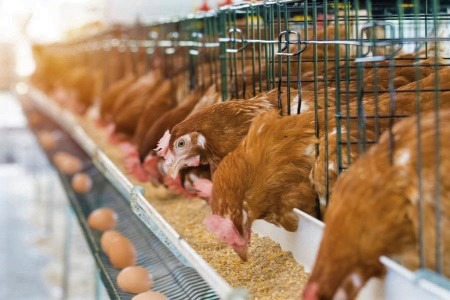 Christmas is approaching and the sale of fowls is fast rising in the country,, but two young men could not wait before Christmas comes.

Two persons have been arrested by Pakyi No. 2 police for allegedly stealing scores of fowls in a poultry farm where they worked as workers in a town called Tweapease in the Atwima Kwanwoma District of the Ashanti region.

The suspected criminals are Emmanuel Kobi, 18 and Isaac Yeboah, also 18 years of age, were arrested on Tuesday by the police for breaking into their employer's poultry farm to steal hundreds of poultry into a sack.

It is reported that on that fateful day, around 2am midnight, the two broke into the poultry farm with a big sack and managed to steal hundreds of the hens that their sacks can contain.

Thereafter, they decided to bolt with them but unfortunately, the noise made by the birds woke one of their colleague workers called Salifu Adama who slept close to the place up.

Salifu, then called Frank, another worker, to go and check why the birds were making noise. Upon arrival, the two saw two unidentified men running with a sack. While chasing them, Salifu drew a stone at them, making one of the thieves to leave his mobile phone and slippers behind as they fled.

The next day, the one who left his mobile phone and slippers approached Salifu at the workplace and demanded his items from him. This gave Salifu a clue of the thieves and immediately informed his boss, who then reported the two persons to the police.

At the Trede police station, the two confessed stealing the fowls, of which many people believe they were going to sell to the public as Christmas approaches. They were arraigned before the Twedie circuit today,, and it is reported that their face in the courtroom showed that of intense remorse.