Check out the most dangerous areas in Accra

By Ghlatestupdate (self meida writer) | 12 days

Danger, unsafe, caution, insecure: these are some of the adjectives used to describe a situation where the risk of harm or loss of property is very high. Of course, being in an unsafe environment is something no one wishes for. However, our actions, inactions dos and don’ts as well as circumstances we can’t control sometimes cause us to find ourselves in generally unsafe environment.

People who may be foreigners or expatriates especially, their tolerance for the risk of unsafe environment is low and because their expatriate status and have to be protected.

For the purposes of research, Green Views Apartments brings you some suggestions of the dangerous neighbourhoods in Accra.

At the terminal end of the Tema motRrway at the South Central part of the Greater Accra lies Ashaman. As a town teeming with a lot of life and activity, Ashaiman is very popular for its commerce and trading. Ashaiman is bordered to the South by Tema a number of communities due to its geographical shape; to the East by Afienya and to the west by Trassaco.

The active community is approximately 45 square kilometers, has an elevation of 128 feet above sea level and actually has a population of about 235,465 people. The name Ashaiman is a Ga word which means “Ashai’s town” and it stems from the history of the town.

Founded in the 1600s by two friends and their families who were the first occupants of the place, Nii Atanya and Nii Ashai came to pursue a farming career and found the place to be very conducive. They brought their families along with them and when they had grown old, Ashai suggested that they move closer to the main road so that people see that there is a settlement there. Atanya disagreed and chose to stay inland whiles Ashai resettled along the roadside where a lot of travellers were hospitably received when they passed by, and this left the area to be called Ashaiman. Due to the relatively high population density of the area, there is also an increase in crimes like pickpocketing, robbery and other vices which are frowned upon.

Referred to by locals as “Circle”, this area which has the interchange is one of the very well-known areas in Ghana. In fact, wherever you find yourself, you can always get a commercial minibus (trotro) from almost anywhere in Ghana to Circle. It isn’t for nothing that Circle is so popular; it is an interchange that connects very important places like Kaneshie, Accra Central, Osu, Amasaman and many other important places. Though very vibrant and populous, Circle is always busy with many people trying to make a living.

Circle has not been spared of crime – indeed, it has been popularly noted as a crime area. Majority of the crimes committed in Circle include pickpocketing of phones and money, selling of fake items, swindling and many more. Circle has popular and big bus stations and Bus Stops which are patronized by many of the commuting public and due to the sheer number, miscreants use the opportunity to make some money for themselves (pickpocketing).

One has to be really careful when purchasing items (usually tech products) since many people sell second hand sub-standard products and there are usually swindlers who show you a correct product but distract the buyer in a conversation and swaps the product with a fake product or a dummy bagged in the case of the intended package. Victims usually find out after they have left the scene of the purchase and the seller is nowhere to be found. A very good way to avoid that is to buy from shops and not from the street hawkers.

Predominantly an Islamic community, Nima has become a popular town for showy display of skills during Islamic festivities and also its vibrant market. The current President of Ghana, Nana Addo Dankwa Akuffo Addo has his private residence at Nima hence the area around his residence is a security zone. It is interesting to know that the name “Nima” was derived from a Ga phrase that means City of the King; Nii meaning King and man meaning city.

A stroll through this neighbourhood will reveal that Nima is an impoverished community and usually has issues about inadequate social amenities like electricity and water, housing and drainage systems. Many people living in Nima are migrants – usually from areas in the North of Ghana and other neighbouring countries as well who come to search for greener pastures and also move there because of proximity to their places of work.

The beauty of Nima is in the cultural diversity of people there and the not so beautiful part of the town lies with the miscreants who sometimes decide to create trouble for others. Some of the youth there easily lose their temper and sometimes resort to violence and rowdiness quickly to solve their problems, and there are many youth have fallen to drug abuse and practice all manner of vices. This makes it imperative for all those who reside there to take their security seriously and avoid getting into trouble with some of these people.

This popular neighbourhood is mostly known for the boxing talents it consistently produces. Bukom with its neighbouring community –Jamestown are very historical places in Accra, with lots of buildings which are relics of the colonial past and very busy markets.

The predominantly Ga speaking community, Bukom is a fishing community with some of its women producing some of the best Ga Kenkey – a staple in Ghana. Bukom boasts of a 4000 seat capacity multi-purpose sports facility and is famous for its boxing arena which is the first of its kind in Ghana.

The community is characterized by its slum housing and busy streets where most of the youths loiter and some play football in the park. Teenage pregnancy is a commonplace and many of the youths “hustle” to make ends meet which includes engaging in vices usually frowned upon by society. Armed robbery however sometimes occurs and mob action is a common thing. Understanding the people and the culture of the neighbourhood is the one of the best ways to avoid getting into trouble with some of these youths. 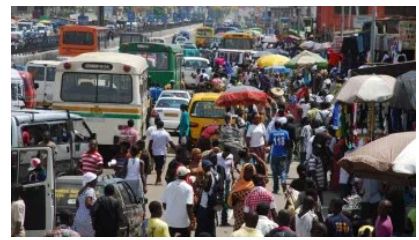