By Tinchie (self meida writer) | 17 days 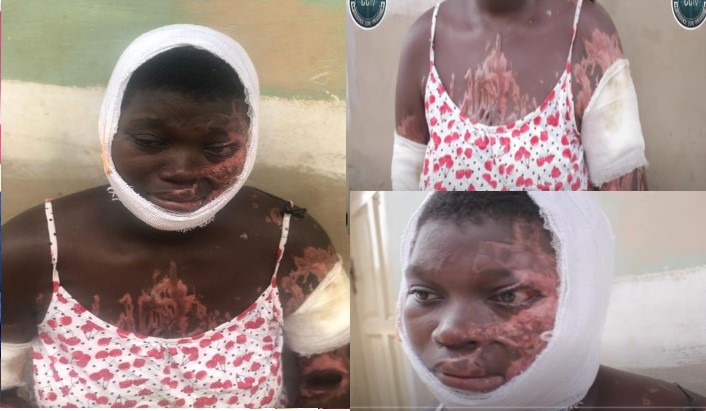 Grace Amedzado suffered sever acid burns on 15 May 2021, leaving terrible scars on face and upper part of her body. Due to poverty, parts of her burnt body are rotting away leaving a terrible stench on her and thus made it difficult for people to get close to her.

The victim narrates to Crime Check TV that her boyfriend with whom she has two children with is responsible for the crime. According to her the boyfriend whose name was given as Bright Bosu kept threatening her any time a dispute ensues between them.

She recounted things got bad between them some few days before the assault. In her account, Grace indicated that a day before the acid burns, Bright cautioned her to stay away from men saying “he said I should wait and see until I become like an old woman.”

This threat was misunderstood by Grace as she felt it was the usual expressing of anger by the boyfriend. Unfortunately for her, the boyfriend was contemplating an assault on her. The night of 14 May 2021, Grace as usual, left the door to their wooden container [home] she sleeps in with the boyfriend and their two kids was left unlocking hoping the Bright doesn’t get to frustrated when he arrives from work that night.

It was late into the night when Grace got awakened by some burning sensation on her body. She screamed loudly and got some friends to rescue her from the pain. According to her, one male friend of the boyfriend rushed in and saw her lying in a pool of corrosive chemical.

He told Grace that someone had poured acid on her. He called Bright to inform him about the accident.

“On a loud speaker I heard Bright say he was at Kasoa. But within seconds he arrived. How could he have travelled from Kasoa to Ashomong Estate within that short time,” a suspicious Grace asked.

She was rushed to hospital for treatment. Her final treatment was granted at Korle Bu where she was discharged. Grace was due for a plastic surgery but due to poverty she had to be moved from the facility and continue at home.

Now her condition is deteriorating, leaving her skin and facial deformed. The matter has since been reported to the police and prosecution ongoing.

Bright who stands accused for this crime, according to Grace has rented out their wooden house to pay for the services of a lawyer to defend him in court. He is claiming innocent to the charges levelled against him by the victim.

Crime Check Foundation learning of her condition is currently mobilizing some funds to support her treatment and upkeep for the children. Grace has now become a burden to her mother who is also unemployed.