By CornerNewsUpdate (self media writer) | 1 year ago 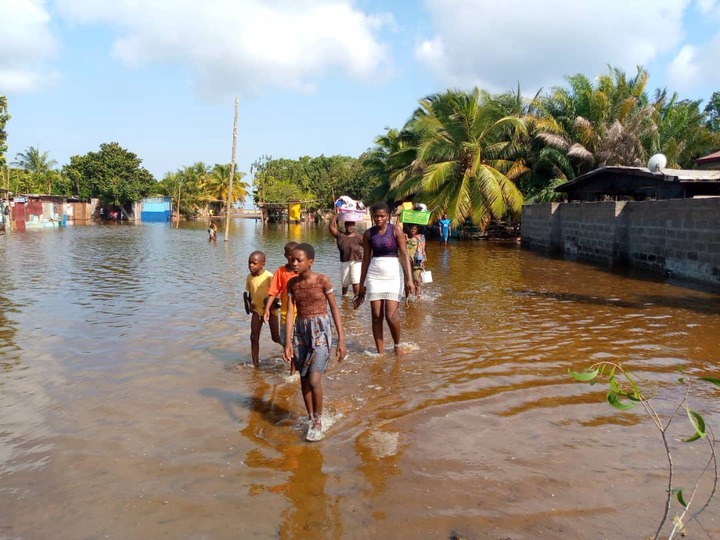 Since the disaster, there have been many different reports coming from different sources in Keta. There were conflicting reports on the causes of the tidal wave destructions, and also on how much efforts the government is putting in to supports the victims of tidal surge.

On Friday 12 November 2021 at a press conference, Honourable Alexander Afenyo Markins- the Deputy Majority Leader, showed a picture of heavy-duty trucks purportedly loading sand from the shores of Keta in the Volta Region. 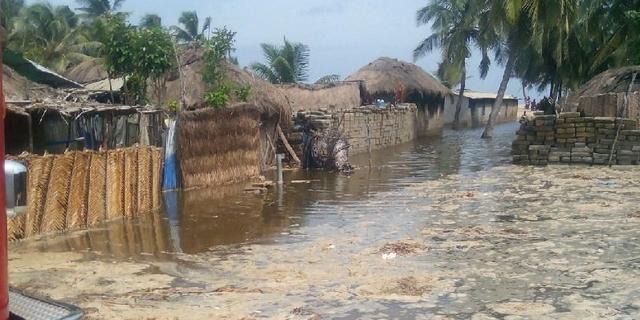 Honourable Alexander Afenyo Markins suggested, that by the picture evidence, it was clear that the sand wining activities in Keta, and its surroundings were the causes of the tidal wave disaster, but the Minority in Parliament has rejected the claim.

Speaking on JoyNews programe the ‘Top Story’, Honourable Nelson-Rockson Dafeamekpor-Member of Parliament for the people of South Dayi constituency, in the Volta Region, has express strong disapproval to the suggestions by the Afenyo Markins ,and the Majority in Parliament, that the destructive tidal waves Keta and its environs were caused by sand winning activities in the area

According to Honourable Nelson-Rockson Dafeamekpor, the activities of sand winning cant cause tidal waves.

Also reacted against the Majority’s suggestion, was Professor Kwasi Appeanin Addo-Director at the Institute of Environment and Sanitation. According to him, sand winning does not influence the occurrence of tidal waves.

Also; on the issue of aid, and supports for the affected victims of the Keta tidal wave, the story is not different.

Whereas some stories claimed, that the government is doing nothing to help the affected victims, official reports have also revealed that, Government through NADMO is in Keta, to offer help to the victims.

Speaking on Joy FM’s ‘Super Morning Show’ program on Wednesday, 10 November 2021, a member of the Keta Municipal Assembly, had claimed that, just seven mattresses were provided to the victims who had been hit by the tidal wave and rendered homeless.

This claim was also denied by Mr. Seji Saji Amedonu, the Deputy Director-General of the National Disaster Management Organization-NADMO. 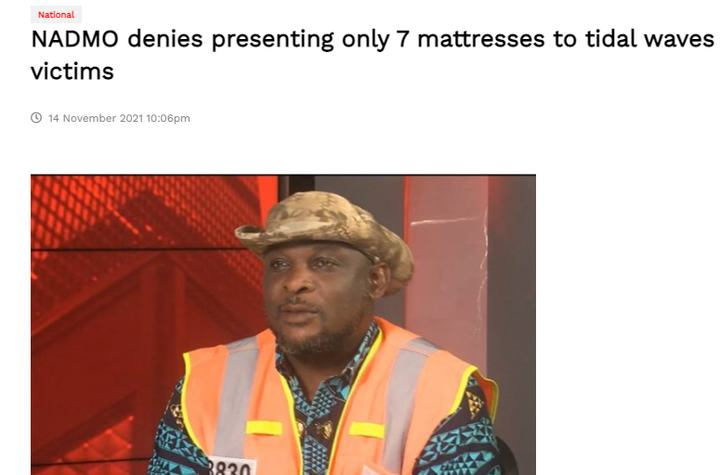 Speaking on JoyNews’s program ‘The Probe’, on Sunday, 14 November 2021, Mr. Amedonu said it is not true that NADMO would carry only seven mattresses all the way from the Greater Accra Region, to the affected victims in Keta in the Volta Region.

Mr. Amedonu further revealed that, “In the particular example of Kedzikope, it was the community center that was the safe haven. This is where we did the presentation of all the items we brought. We had a bigger truck behind us and we had a few items on the pickup. On that pickup were seven mattresses which were for a symbolic presentation but the bigger truck was full of items. At the end of the day, almost all the three districts had something that Tuesday. It could not be seven items”.

Speaking to the program host Emefa Apawu, the NADMO Deputy boss said “we sent a full truckload of items, and we had news that corporate Ghana was coming to do something this morning. So when they came, together, they did the presentation to the Regional Minister, and had their way of distribution. NADMO provided them with the data and where the people are for those distributions to be done. I personally went to some of the communities to do some distributions”.

The question is…one disaster in Keta and its environs; the people needed help…but why so many conflicting stories. 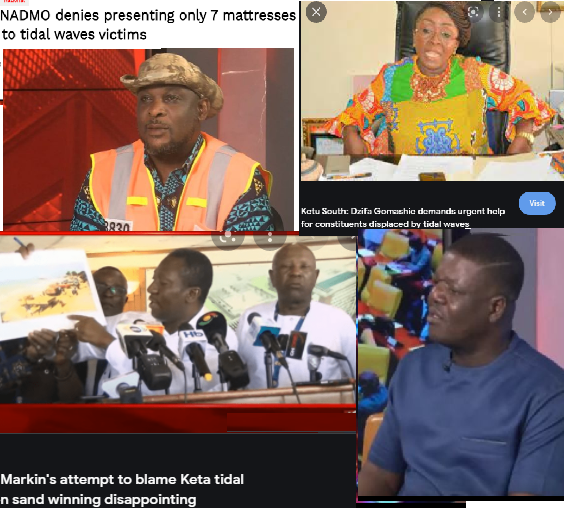