Final Notice: Vacate From Your Houses Within 14 Days Or We demolish The Building On You- NADMO 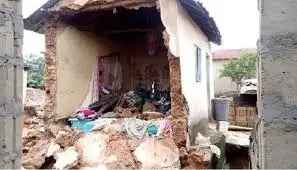 The people of Wenchi constituency did not hear good news last week as a building collapsed and killed mother and child at Akrobi township which shocked the entire township in the Bono Region.

According to report, the people living in crack buildings has been warned to demolish their buildings several times but they refused to demolish it and it has led to one of the houses collapsing and destroying people's lives and properties.

Leading to that NADMO officials, and other agencies monitoring buildings at Wenchi Municipal assembly has visited the place and marked over 20 houses which will be demolish in the next 14 days.

NADMO officials has told the house owners that they're giving them final notice and will advised them to vacate from their houses for the exercise to place in the next 14 days and warned them that they will not come and spare them anymore for they're serous this time around. 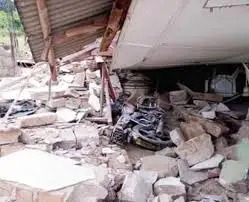 According to report, the houses marked at Akrobi township are built for so many years ago and it could be described as " Atta Kwame Building" which is not needed to exit in 21st century developing countries.

Ewiase FM Journalist, Adom Nana Yaw Piesie listening to those who houses has been affected monitored by Opera news writer Mavis-Love, told him that they will vacate the various affected houses for the demolishing exercise to take place in the coming two weeks for NADMO officials has warned them several times on it.

Assembly member, Wilson Gyan who is the leader of Akrobi community told news reporters that he will monitor all actions and make sure everything is done in the right way as the bylaws of the assembly has asked them to do.