The man who was arrested for allegedly killing three people and keeping their bodies in a refrigerator has said he only eats fried rice with chicken.

He has therefore been rejecting any food presented to him because he claims not to be his favourite.

Richard Appiah, 28, sent shockwaves across the country in August, when he was caught keeping human body parts in a refrigerator in his room in Alaska, a suburb of Abesim near Sunyani in the Bono Region of Ghana.

A source has told Daily Guide that since coming into police custody, suspect Appiah has only insisted on eating fried rice with a well spiced and grilled chicken and will eat nothing else apart from the popular food.

He is said to be giving some information about what might have motivated him to perpetuate the heinous crimes, and reportedly told investigators that he started killing dogs before switching to the killing of human beings.

Richard Appiah, the suspect, made his first appearance in Kaneshie District Court and is charged with two counts of murder.

Following reports to the police on August 20, one of the deceased was discovered to have been cut into pieces in a fridge, while two other deceased were discovered in other rooms of Richard Appiah’s home. 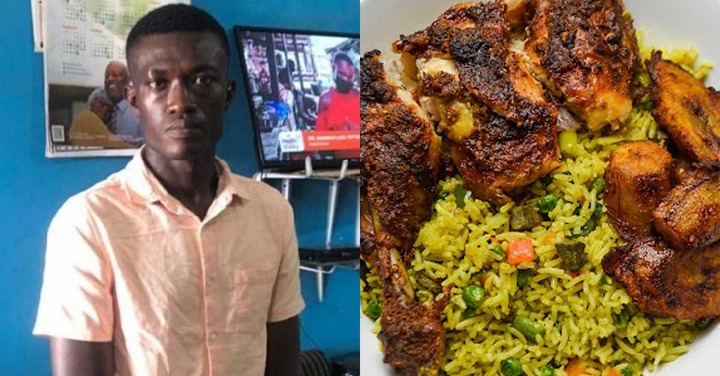 It may be recalled that the alleged murderer killed at least two boys aged between 13 and 15; said the police.

Their names were given as Louis Agyemang, who were believed to be the same family member as the suspect, and Stephen Sarpong, 15, whose body was dismantled by the accused person.

Police later discovered buried intestines which were also believed to be from one of the victims he murdered.