By LordcelibateMedia (self media writer) | 4 months ago 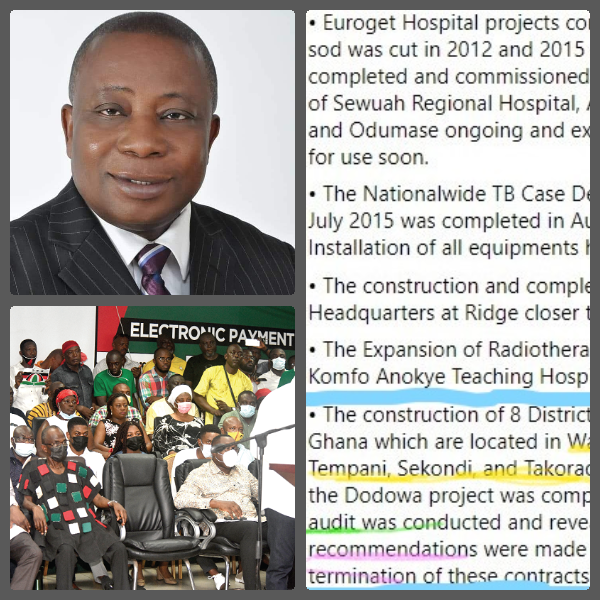 Kwaku Agyemang Manu, the Honorable Minister for Health on his Facebook page, allege that they found over expenditure on some 8 District Hospital project under the National Democratic Congress (NDC).

In his words, these project are in Wa, Fomena, Timpani, Kumawu, Abetifi, Sekondi, Takoradi, and Garu. He admitted that, these health projects were abandoned since July, 2016 due to the malpractices.

According to him, they refer the matter to the Attorney General for necessary actions. He said his office advice that, the contract should be terminated after the the Value for Money Audit on the 8 health projects. “The construction of 8 District Hospital and Integrated IT Systems in Ghana which are located in Wa, Fomena, Kumawu, Abetifi, Garu, Tempani, Sekondi and Takoradi was abandoned in July, 2016. Only the Dodowa project was completed by the NDC. Value for money audit was conducted and revealed over expenditure hence recommendations were made to the Attorney General to see the termination of this contracts”, words of the Minister.

The allegations were made through a reply to the Former President John Mahama on his statement about the NPP government leaving his projects to rot. He sighted many projects they have continued even the ones abandoned from the Kufuor era, which are either completed or yet to experience completion.

The Minister posted this getting to two weeks but did not respond to his allegation for Ghanaians to know the truth. Since they pretend not to see nor respond, we are tempted to believe what the minister said was the fact and the truth and any late rebuttal will not be taken serious. The following is going to happen:

First of all, we the people from Wa, Fomena, Timpani, Kumawu, Abetifi, Sekondi, Takoradi, and Garu will blame NDC for not having a District Hospital till now. We will advice ourselves at the appropriate time.

Secondly, all Ghanaians are beginning to believe that, the NDC is really corrupt and common hospital to save life of their family, wives, brothers, sisters, siblings, etc. they could watch the face of God and inflate the cost. Which lead to the hospital to being uncompleted and will soon be terminated.

Again, if the New Patriotic Party is able to build another hospital for us, we will see them as our saviour. Then, NDC should forget and stop trying to convince us that, they can offer something better than what the NPP is offering.

Finally, we will moving forward, consider the act of the NDC as a disrespect to us and did not value our lives. The Minister has replied to almost every allegations and informs the public on the happenings in the health sector.

Now, it seems the NDC has no moral right to criticize the NPP and can no longer accuse the Minister for corruption. He who calls for equity must come with clean hands. We hope they clear the air soon to know who to blame for our plight.

We the concern Ghanaians are pleading with the Minister for Health, to provide us with all the details on the Value For Money Audit made on the 8 District Hospitals. Also, the level of the matter, whether anyone is prosecute and charged, what is the future of those projects. Share your thoughts and follow me.