Ambulance Service Denied Allegations That The Woman's Death Was Caused By Waiting For Fuel Money.

The National Ambulance Service Coordinator in the Western region Dr. Tawiah Tsiameh has denied the allegations that delays resulting in a search for fuel money for an ambulance have led to the death of a woman in the hospital.

According to Dr. Tawiah Tsiameh, the deceased who was referred from the Holy Child clinic at Fijai to Korle Bu Teaching Hospital after a Caesarean section had her baby left behind and they were asked to go back and pick the child up which has caused a delay and led to the death of the woman.

“While on the way, they were called to go and pick the day-old baby, so they had to return to the hospital and that caused a delay,” - Dr. Tsiameh.

It has also been reported that before departing from the hospital, there was a lot of controversy about whether to take the day-old baby or not which has also taken some of their time in the hospital. 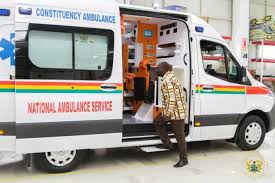 “They were contemplating whether they should just add the child or just go like that, and that took some time. Later they decided there was no need to take the child because the child cannot be breastfed by the mother.”

Meanwhile, the husband of the deceased blamed the conduct of the ambulance service for the death of his wife.

However, Dr. Tawiah Tsiameh said there was no need to refer the lady since there is an obstetrician-gynecologist in the region who can take care of the woman.