By Dawuro (self media writer) | 9 months ago 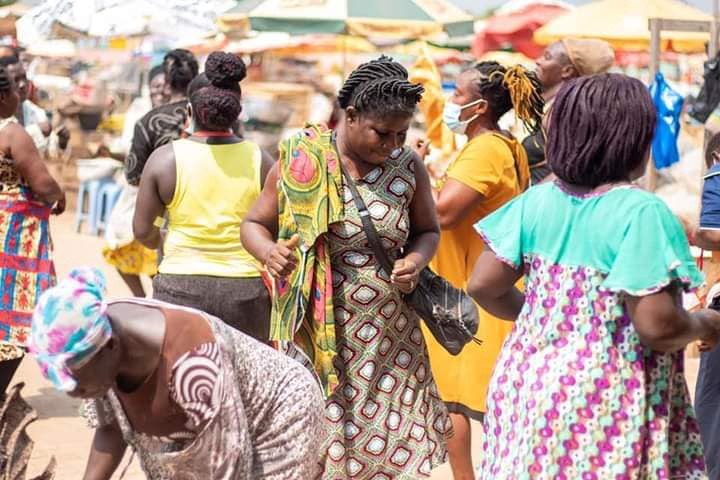 Some of the market women including the leadership in at the Sekondi and Takoradi markets in the Sekondi Takoradi Metropolis of the Western Region (WR) are bemoaning about the rate at which their colleagues have been disregarding the safety protocols and thus calling on the Ghana Police Service (GPS) to arrest those recalcitrants.

According to the women who made the appeal to Takoradi-based Skyy Power FM and monitored by DAWURO, they feared the non adherence of the etiquettes could escalate the spread of the virus in the market.

"they don't wear it, if you tell them too then they become angry then they start quarrel with you," a trader lamented. What annoys me is those who put it at their chin...in fact as for we the market women here we are in a very big danger; we're not safe at all so the police should come here," another trader bemoaned.

Meanwhile in an interview with the Mayor of the Metropolis, Hon Abdul Mumin Issah, on same network, he said the Metropolis had received the complaints and thus, what the Assembly has strengthened its sensitisation program to educate them.

"Our NADMO and NCCE have also been going to the schools sensitizing the students and the teachers on what to do to prevent themselves from the covid," Hon Issah said.

He continued, "we think it is sensitization that is needed most at this time... the reason is, if you say you're arresting them, where are you going to camp them? there will be no place and if care is not taken we may end up giving them the virus instead."

The mayor however revealed that president had given the metropolis 30,000 pieces of nose masks and hand sanitizers each which the Assembly would be distributing in the days ahead.

According to him, the Assembly together with the police would then (after the distribution) restrategize their enforcement skills to make sure everybody wears the mask "because anyone who would be found not wearing would then have no excuse."

He added that, the police had been told to round to make sure every drinking spot in the metropolis is closed and also said he had called on the regional police command which is also in the metropolis to call on the assembly for any support that they would need in the enforcement of the covid law.

The Sekondi-Takoradi Metropolis now leads in the cases recorded in the region.