By L-Update (self media writer) | 6 months ago 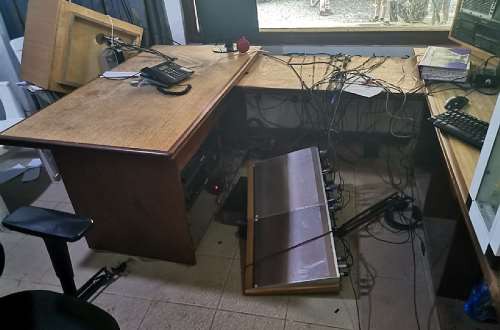 The Ghana Police Service has announced that it has set aside a GHS10,000 reward for anyone who will provide information that would lead to the arrest of persons who attacked and vandalised Radio Ada.

Some masked, heavily-built men on the morning of Thursday, January 13, 2022, attacked Radio Ada, a community radio station at Ada Foah in the Greater Accra Region, and ransacked its on-air studio without provocation.

The raid followed persistent warnings to the station by some chiefs in the area, to stop their broadcasts on a project being spearheaded by businessman Daniel McKorley (McDan) which involves the Songhor salt lagoon.

With the Police currently conducting an investigation into the incident, it is seeking information from the general public.

In a statement from the Ghana Police Service today, it has said anyone that would provide useful information that will lead to the arrest of the suspects will receive a GHS10,000 reward.

“We will do everything possible to find those thugs and deal with them according to the laws of this country. To this end, the Police Administration has placed an amount of Ten Thousand Ghana Cedis (GH¢ 10,000.00) bounty as an informant reward for anyone who offers a piece of credible information leading to the arrest of the thugs who invaded and vandalised the Ada Radio station and assaulted the staff,” part of the Police statement reads.

It concludes, “We want to give the assurance that adequate measures have been fashioned out to protect the Radio station and its staff as efforts to arrest the culprits to face justice continue.”

Below is the full Police statement: 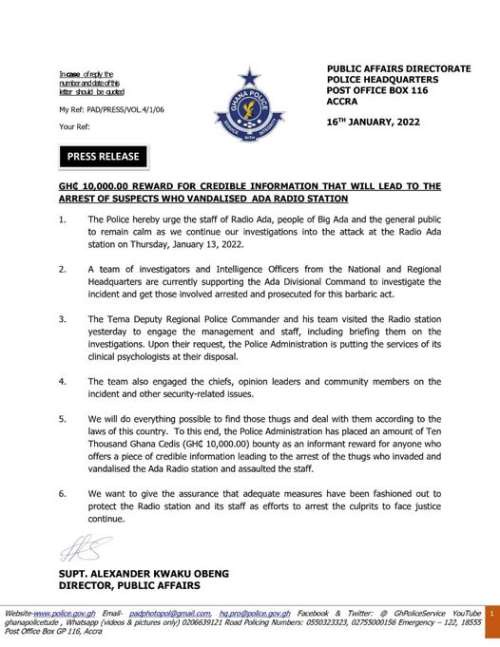