Brave Kid Breaks Lose From Kidnappers With A Razor Blade

By Tinchie (self meida writer) | 17 days 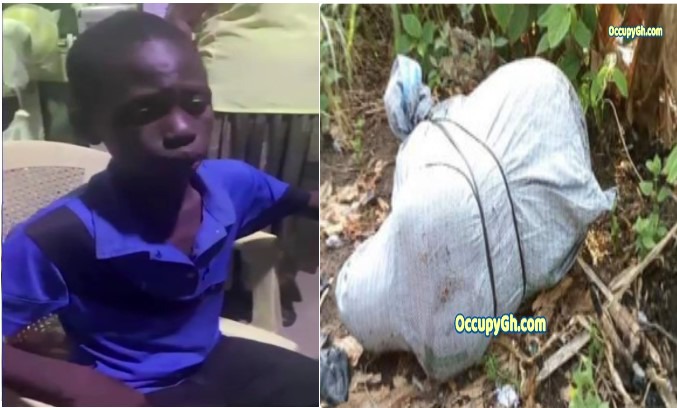 The parents of a nine (9) year old boy Philip Amatefe would have been hit with the undesirable news about the kidnap of their son today. The parents would have mistaken his absence from home to be his usual truancy when he is rebuked for wrongdoing.

The little boy narrates he was kidnapped by some assailants after the father charged him to retrieve a misplaced phone cover belonging to the mother. He had already been lashed by the father and absconded hoping to return late this evening.

He was grabbed and sedated by his assailants a few meters away from his neighborhood in Kasoa and taken to an uncompleted building. In his narration of what happened, the 9-year-old boy said he woke up being tied up in a sack and heard his assailants complaining that “the client had delayed and that the drug is wearing off”.

This got him scared. He searched for a razor blade in his pocket and cut open the sack and escaped when he heard the footsteps of his kidnappers departing from their hideout. According to him, the kidnappers never saw him escape.

As he pants whiles running from his kidnappers, some good Samaritan got hold of him and reported to the Weija Police Station. It was there that poor Amatafe recounted what happened.

Angel FM’s reporter Kwaku Asiedu indicated that the boy has been returned to his parents. He reported that the parents were in shock upon hearing what the son had encountered today.

Mr. Asiedu shared that the parents never anticipated the son would be threatened by kidnappers. They said that Amatafe is a stubborn kid.

The reporter stressed that the Kasoa area has been hit with several cases of kidnapping and ritual killings of children, and as such residents suspected the assailants were contracted by ritual killers to kidnap the kid.

In the meantime, the police are investigating the incident. The kid despite being tough will need some psychological support to get over this traumatic experience.