Two prominent Ghanaians have remarked that the current strategy adopted by the Ghana Police Service under the leadership of the acting Inspector-General of Police Dr. George Akuffo Dampare, to combat armed robbery is not the best one. The two, Kofi Bentil of IMANI Africa, and Joe Anim, Chief Executive of Wolo Limited, and also a member of the State Interest and Governance Authority, says it would be appropriate for the Police to reconsider its strategy for a smarter and preventive approach given the rise in robbery cases in the cities.

According to them, the best way to clamp down on armed robbers is to deploy mass police bikers into the city. It appeared Kofi Bentil had trumpeted this idea for long and found it more fulfilling learning about his colleague Joe Anim re-echoing the idea.

“The only way to beat the robberies is to flood the system with bikers. Ask the government for hundreds of bikers for your men everywhere,” Joe Anim said leaving Kofi Bentil to stress that “I have said this too many times.” 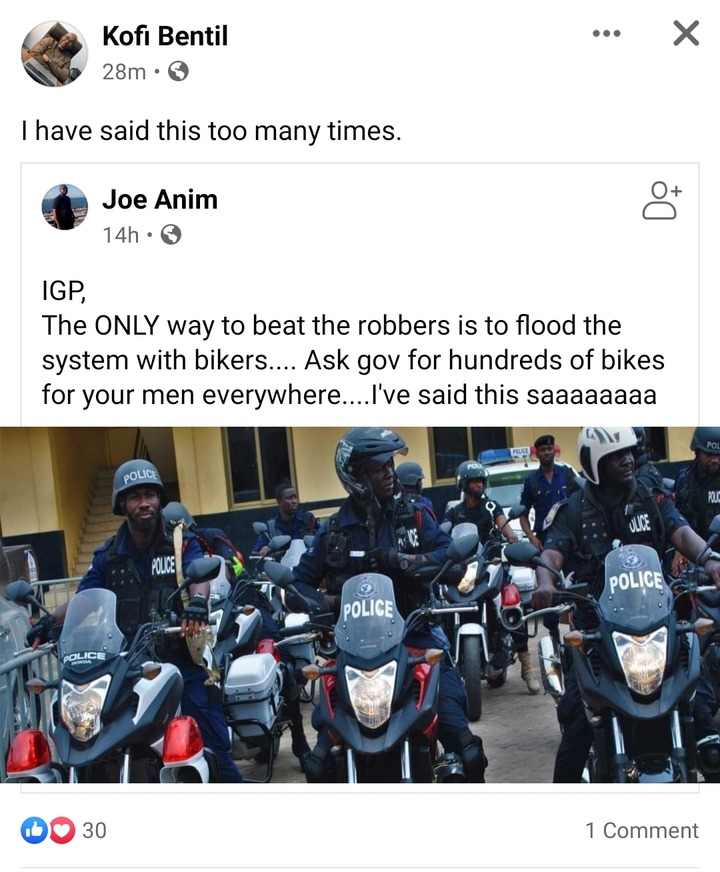 It might be right to put this proposal to a test given that these armed robberies often use motorcycles in their operations and thus escape arrest from the police in the busy streets of the cities. With motorcycles, the armed police officers can at least pursue any gang that has been engaged in a heist until reinforcement comes in to arrest them.

Currently, only a few motorcycles are being used by the police and a majority of them are only for escorts. The suggestion from these prominent personalities is convincing especially when evaluated on an economic basis.

Fuel consumption and maintenance costs with regards to patrols and operations could be minimized with these police motorcycles. This equally, will enhance police visibility across crime-prone areas and thereby promote security for the people.

In recent times, there have been several daylight robberies in the city of Accra, Cape Coast, Takoradi and Kumasi. Lives have been lost to these criminals and a few arrests made on suspected robbers. But the review of the police operations in light of these cases had become a concern for the communities and among learned persons, given that the police scarcely foil a robbery before any harm is committed.