Ejura Gunshot: Committee investigating the death of "Kaaka" and others begins work today

By Theo-Tech (self media writer) | 6 months ago

The three-member committee found out by Ambrose Dery, the minister of interior to look at the factors that led to the death of three men in Ejura and therefore the incident that left others injured will start its work today, Monday, July 5, 2021. 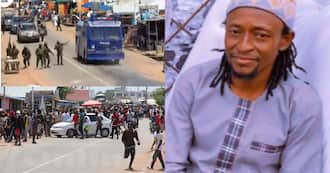 George Kingsley Koomson, a Justice of the Court of Appeal as Chairman, Security Expert, Dr. Vladimir Antwi Danso, and Juliet Amoah, executive of Penplusbyte, a civil society organization are members of the committee.

They are said to be in Ejura to kickstart their investigations.

The committee was found out after an order from President Nana Addo Dankwa Akufo-Addo for the minister to look at the happenings that caused the death and injuries of some indigenes of Ejura.

Ibrahim Muhammed, a father of six, was murdered in cold blood by some unknown persons outside his residence at Ejura within the Ashanti Region of Ghana.

Sahara Hudu, the deceased's wife, said he had received warnings regarding his activism from an individual she knows.

However, her attempts to prevent him from getting himself in peril proved futile as he continued together with his advocacy.

Following his death, the youth of Ejura beganan indication seeking answers from authorities.

It led to a shooting by security personal and therefore the death of two people.

Sadia Abubakar, the sister of Abdul Nasir Yussif, has demanded justice following the death of her brother, who was shot and killed in Ejura Sekyedumase within the Ashanti Region.

Content created and supplied by: Theo-Tech (via Opera News )