Vormawor and colleagues weep profusely during the release of press statement on the murder of Kaaka.

By Optimistic3 (self media writer) | 6 months ago

In a joint virtual press conference among three of the leaders of the Fixthecountry movement,the convener of the movement Mr Oliver Barker Vormawor touch on a number of issues concerning events leading to the death of Ibrahim Mohammed.

Oliver talked about how the murdered campaigner has left behind six children in an attempt to get things in the country fixed.

He touched oh how the said Ibrahim Mohammed received voice messages of threats from individuals believed to be the bodyguards of the municipal chief executive officer of Ejura Sekyeredumase.

According to him, the voice messages sent to Kaaka clearly pointed to the fact that, the activities of Kaaka on Facebook was making the government on unpopular in the area and everything must be done to stop him.

He added that a group of people went to the Ejura police station to stop him from his activities on Facebook and according to him, instead of the police to caution such individuals to all Kaaka continue exercising his constitutional rights, he was rather issued a warning letter to him.They wept profusely throughout the address.

Take a look at the warning letter the police issued to him over his activities on Facebook. 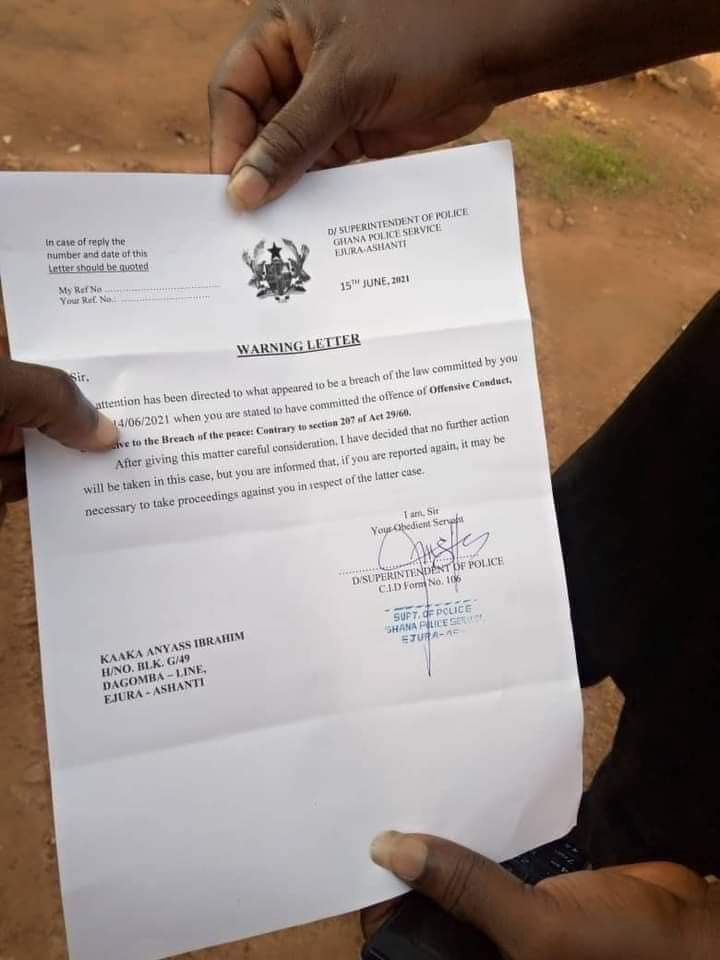 Take a look at the statement they issued at the end of the virtual press conference they held over the death of their colleague.

"We have just received depressing news of the death of our colleague and friend Ibrahim "Kaaka" Mohammed, a #FixTheCountry activist and member of the Economic Fighters League who was attacked by a mob for his #FixTheCountry related activism.

As you will recall, we earlier reported that Kaaka was attacked on the same Friday the Ghana Police Service arrested other #FixTheCountry Convenors.

As Tv3/3FM has reported, Kaaka received voice messages of threats being made on his life. In fact, there are voice recordings on which some persons known to be bodyguards to the Municipal Chief Executive of Ejura Sekyeredumase, could be heard saying that activities of Kaaka on Facebook were making the governing New Patriotic Party unpopular in the area and that every means possible must be used to stop him.

In fact, less than two weeks ago, various individuals had gone to report Kaaka to the Ejura Police in order to get him to stop stop his work. Instead of cautioning those individuals to refrain from intimidating and threatening Kaaka in the exercise of his Constitutional rights as a citizen, the Police rather issued Kaaka with a warning letter.

According to conveners of the Fixthecountry movement, they will seek formal audience of the inspector general of police tomorrow about the sad incidence.

They concluded that, they will not rest until Kaaka gets justice.