By CyraxPen (self meida writer) | 5 days

A Thai man suffered permanent disfigurement of his "stick" after having it stuck in a padlock for two weeks. The 38 year old bachelor clamped the metal device around the base of his genitals during a bizarre sex act, but lost the key and his penis began to swell.

He failed to remove the small lock and left it on his 'stick' for over 14 days, until he became infected and the pain became so unbearable. He was rushed to a Bangkok hospital. His mother told doctors that her son “likes to stick his "something" through little holes. " 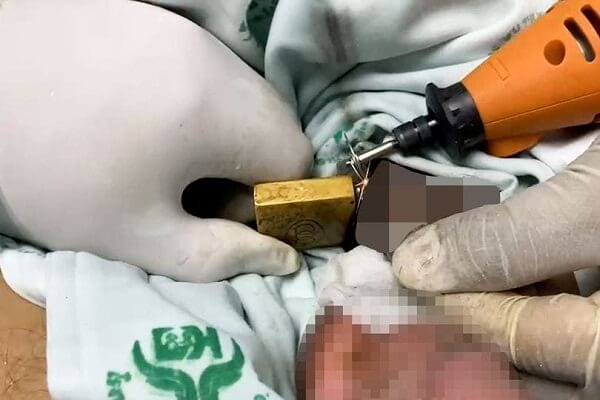 He told me he did this because he was bored and likes to stick his "little something" through small holes. I was mad at him for shaming me like that and told him not to do it again." Rescue officer Thongchai Donson said he received the emergency call but the injury was "worse than expected" and had to transport the man to the nearest hospital.

Doctors spent more than 30 minutes using an electric cutter to slice through the metal lock. They slipped a thin sheet of metal between the bar and the man's skin to keep it from being cut and squirted water on his body for lubrication. Once he was released, they administered antibiotic cream and gave the man penicillin tablets.