They Killed Someone's Father Just For GHC7,000; Sentence Them To Life Imprisonment For some crimes, the state would have to take drastic measures to deter others from committing the same. How could one take someone's life just for just Seven Thousand Ghana Cedis (GHC7,000.00)? Life is priceless, and no one has the right to take the fellow man's life for any personal gain.

The story of the murder of Albert Anyinado, a 30-year-old man in the Volta Region will make you cry over the cruelty of some three men who attempted to sell his body for money. Mr. Anyinado was murdered by Kalefe Korku, 42, Afedo Kpotor, 21, and Ametoke Sitsofe, 27, and reportedly attempted to trade off the corpse for cash [an amount of GHC7,000.00] with a fetish priest in Agbozume.

According to police reports, the fetish priest was alarmed by the deal and got the Volta Region command informed about this evil act of the three suspects. An arrangement was made to meet up with the three suspects to execute the transaction but this was to trap them and arrest them.

Currently, in police grips, the three suspected murderers are being interrogated over the case and other related crimes. Ghanaians who have heard about the incident are demanding that the suspects are sentenced to life imprisonment without any delay.

Some say such crimes shouldn't be visited by any hesitation for a trial in pursuit of justice given the facts that had been laid bare in their admission of committing the crime. To those who had imagined the horror of the case, said, things are getting frightening with the rate at which some Ghanaians want to get rich quick. 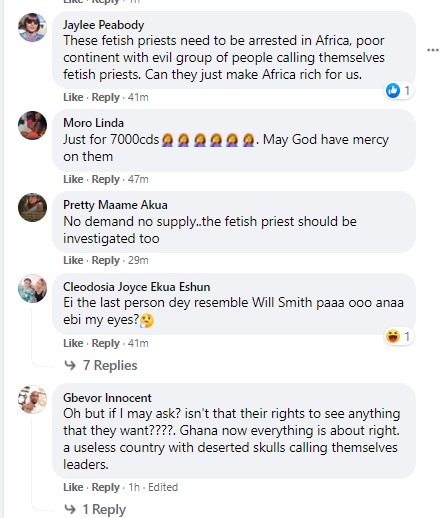 The desperation for wealth had caused many to commit heinous crimes. But for Opata Gabriel, there is no excuse for them as he thinks hard work pays.

"...there is no work in this country for youth to do but those on the street selling pure water and other guys selling fan milk and other things are you people handsome than them?" 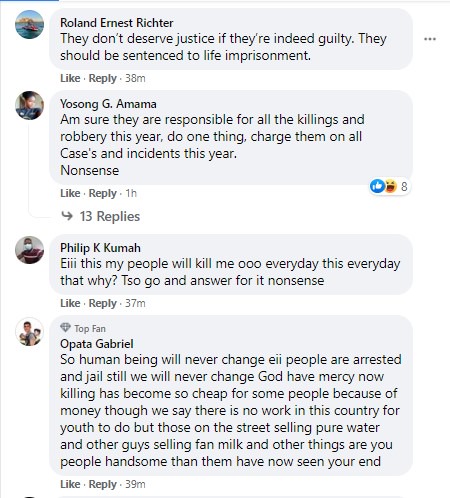 As the public takes on the conversation on this matter, the Police would have to inform the public on what occasioned this crime. Some people have even suspected the fetish priest to be a suspect.