The Ghana Police Service is not compromising on attempts by some persons who have been faking kidnapping in the country. As contained in recent reports, Sekondi-Takoradi of the Western Region has become infamous for fake Kidnapping and as such such cases are treated with contempt and high-level of investigation.

The latest coming from Kojokrom a suburb of Sekondi-Takoradi Metropolis is that a twenty-four (24) year old woman, named Akosua has been arrested for faking her kidnap. According to reports she intended to extort some cash amounting to five thousand Ghana Cedis (GHC5,000.00) from another man whom she claimed is the Godfather.

The man fearing for her life reported the incident to the Kojokrom Police and the case was subsequently transferred to Takoradi Central Police for further investigation. The godfather is said to have informed the police he received an unexpected call from Akosua on Friday informing him about her abduction.

This was followed by a series of text messaging about how her life was being threatened by her abductors. The godfather was alarmed and felt he had to act quickly to save her.

Preliminary investigation by the police led to the arrest of one other woman believed to be an accomplice. According to a Takoradi-based broadcast journalist, Nhyiraba Paa Kwesi Simpson the lady (Akosua) turned himself up at the Takoradi police when the police contacted her through the first suspect [name withheld]. 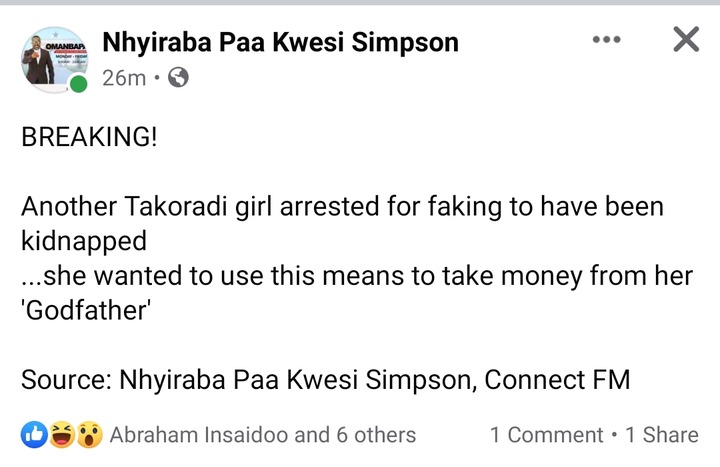 She has been detained and assisting investigations. Information gathered has it that her plan was to extort the money from the godfather to settle some personal needs.

Surprisingly, Akosua is from a wealthy home,.as her father is said to be resident abroad. From her responses to the Police, Akosua appears to be very educated.

Her case from every indication would be treated just as Josephine Panyin Simson's. The law will take its full effect on this fake kidnapping incident without mercy.