The murdering of humans with Cutlass and butcher knives are increasing in our communities as recently, an incident happened at Abesim of which Ghana's ex footballer was caught keeping human flesh inside a refrigerator in his own house. The recent murder case has sparked fear and panic into the individuals so they are scared in sending their children on an errand.

However, an unknown man was spotted roaming in the residents of Lome in the Gomoa West district of the Central Region with a Cutlass. He met a nine-year old girl and sixty-year old woman on his way and unfortunately, he stabbed them and they are severely injured. The man was about to attack an eight-year old pregnant woman and the residents arrived at the scene and rescued the pregnant woman. 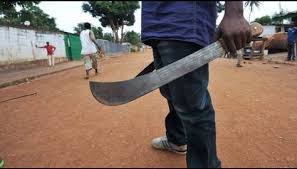 The residents were very angry and decided to lynch the man but they heard a report that indicate the man isn't mentally upright and was caged in a room but escaped on Monday morning. The residents spared the man due to his condition.

The injured victims were quickly rushed to the Apam government hospital but the nine year old girl condition is very critical so she is being transferred to Winneba Specialist and Trauma hospital.