Another man allegedly killed and decapitated in Sefwi Debiso

Residents of Sefwi Debiso in the Western North region woke up today in a great shock. A man believed to be in his early 30s was found dead in the bush with his head decapitated. His left arm as well as genitals were removed. It is believed that he was killed for money ritual purpose by unknown criminals. 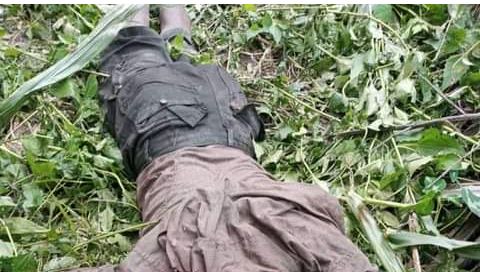 According to some residents who spoke to CitizenOne, the man whose identity is yet to be known was found lying prone in the bush. The surroundings also suggested he struggled with his killers.

The police has conveyed the remains to Sefwi Government hospital for preservation while investigations commenced.

In another breath, a 20 year old Fracis Awuni has been picked up by the police for killing his landlord in Amoakrom, a community in Western North region. According to Francis who reported himself to the police after the distateful act, he picked a quarel with the landlord and the latter threatened to kill him (Francis) to end it all. In the scaffold, he overpowered the middle aged, man killing him first. Awuni Francis is currently assisting the police in investigations.

Ritual killing is becoming common in Ghana of late. It will be recalled that just last week, an ubber driver was killed, beheaded and dumped in Feyiase, Kumasi. The police have since arrested three suspects who have been remanded into prison custody for two weeks. According to the key suspect, he was asked by a ritualist to bring a human head for money ritual.

The Kasoa ritual murder is equally fresh in our minds.