By Discoverers_Gh (self meida writer) | 10 days 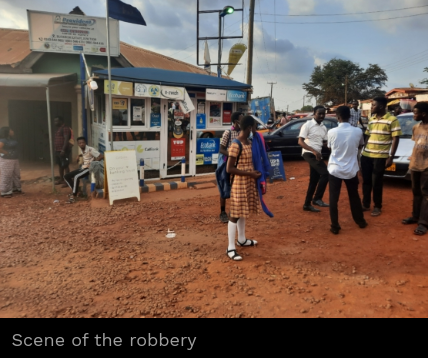 In the hot afternoon of Tuesday, June 1, 2021, some unidentified fully armed robbers attacked and roobed a non-bank financial institution known as CSSL Enterprise located at the Buokom Estate Junction of the Ashanti Regional capital, Kumasi, leaving one worker dead at the scene.

According to the news by Joy News on Tuesday afternoon, some of the victims of the armed robbery incident shared their sad story of the whole shocking moment that actually transpired at the premises of the CSSL Enterprise yesterday.

According to the eyewitnesses who happened to be actually workers of CSSL, a fair tall man stormed the premises as a normal customer but before they realized, it was an impending armed robbery operation.

According to them, the fair tall man held a customer, beat him, and asked him including everyone to lie flat on the bare ground with our faces down. They narrated that one of the armed robbers was standing right at the entrance of the building monitoring passers-by whilst the rest of them extorted from the bank's treasury the monies made from all the transactions undertaken for the weekend.

According to them, one of the staff members, Collins Dapaah, sustained numerous gun shots after he attempted to sneak into the washroom and make call with the police in secret. He died instantly on the spot and his body has been deposited for autopsy.

The broad daylight armed robbers succeeded in their operation and went away with over one hundred and forty Ghana cedis (GH¢140,00) from the CSSL Enterprise. Residents expressed utter shock at what happened in broad daylight in the area.

The police are still in search of the armed robbers, and as of now no arrests have been made.

Do This To Prevent Your WhatsApp Account From Being Hacked

Video: Man Being Arrested For Filming Police Officers; Is There Any Such Law In Ghana?-APlus Quizzes

Weird Punishments Thieves Suffer In The Name Of Mob Justice