Life-Saving Mission Ends Deadly: Rescuers Involved In Accident In Attempt To Save Woman From Poison 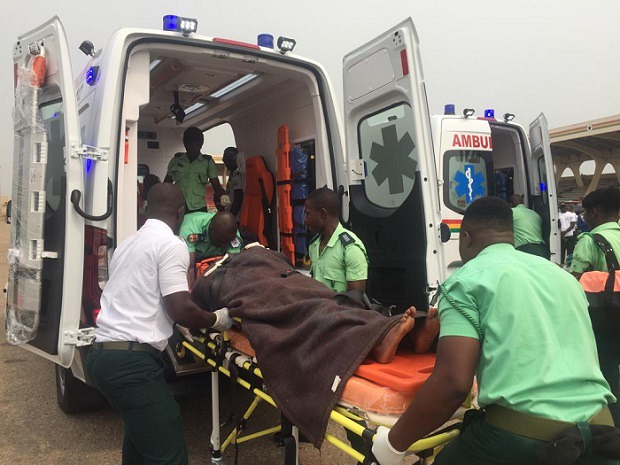 It is strange how a life-saving mission could end this deadly. A 30-year-old Adwoa Ann who attempted suicide by consuming a poisonous substance is in a terrible state after being involved in a vehicle accident today.

Her rescuers, a sister-in-law whose name was given as Esi Arthur and the driver sustained various degrees of injury in a vehicle accident while they were transporting the victim to the St. Francis Xavier Hospital in Assin Fosu for emergency care. The victim, Adwoa Ann is currently in the intensive care unit battling for her life.

She is being treated for poisoning and other internal injuries as a result of the vehicle accident. Her in-law, Esi Arthur has been admitted to the Komfo Anokye Teaching hospital given the degree of the injury. It is sad that her condition is very critical.

The account from some neighbours revealed that the 30-year-old Adwoa Ann was determined to end her life by taking a weedicide after she misplaced her life savings of Five Hundred Ghana Cedis (GHC500.00). He couldn't bear the pain and memory of her loss and decided to end it all by committing suicide.

From her residence at Assin Dompem in the Assin Central Municipality, this poor woman retired into her chambers and drank a portion of this poisonous substance. She was found but in a very terrible state by the in-law some hours after taking the substance.

Residence says the in-law and the driver were in haste to save her life and as such had to speed off to the hospital which was miles away from their township. The vehicle [a taxi] in which they drove in together with some other passengers, got involved in an accident.

Some residence hearing about the incident, in their suspicion, believed that Adwoa Ann never wanted to be saved hence the accident. They think that death was after her life and that anyone who attempted to save her could die or get badly injured in the process.

There Will Be Chaos If We Accept Them To Our School: Double Trouble For Bailed KOSS Students